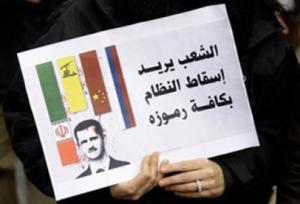 Syria’s opposition on Thursday urged voters to boycott a referendum for a new constitution, as monitors said government armour moved on protest hubs Homs and Daraa, cradle of an 11-month uprising.

As regime forces pummelled the central city of Homs for a 13th consecutive day, four people were killed in the southern town of Daraa when security forces clashed with rebels, monitors said.

President Bashar al-Assad, whose government has vowed to crush dissent, on Wednesday decreed a vote for February 26 on a new charter that could end nearly 50 years of single-party rule.

The United States dismissed the move as “laughable,” saying “it makes a mockery of the Syrian revolution.” Russia, a major weapons supplier to Damascus, welcomed it.

And the Local Coordination Committees, a main opposition activist group, rejected the new charter and called for a vote boycott, as well as stepped up efforts to topple Assad.

“The draft constitution is no more than a political tool or a policy paper written by the barbaric regime,” it said in an emailed statement.

“We see no alternative but to topple the regime along with its symbols, representatives and foundational ideology.

“The Local Coordination Committees calls upon our people to reject and boycott the alleged referendum to confirm the lack of public support for this criminal regime.”

The Syrian National Council, the most representative opposition group, is also likely to reject the constitution, given one of its guiding principles is “to overthrow the regime using all legal means.”

Regardless, the proposed charter rules out most of the opposition as it bans religious parties and dual nationals, preventing the SNC, which includes the Muslim Brotherhood, and most of its leadership from running for office.

The proposed charter drops Article 8, which declares the ruling Baath Party as the “leader of the state and society,” allowing for a multi-party system, state television said.

The president must be a Muslim man and may serve a maximum of two seven-year terms, although it is unclear if this would apply to Assad, already in his second term.

In April Assad scrapped emergency rule in force since 1963 when the Baathists took power in a coup d’etat. But he has repeatedly promised reforms that have failed to materialise since the uprising erupted in March.

The 46-year-old president, who succeeded his late father Hafez in 2000, said the constitution would usher in a “new era” for Syria, SANA state news agency reported.

Analysts said the referendum was too little, too late and fell short of what was required to end the uprising inspired by similar movements that last year overthrew authoritarian leaders in Egypt, Libya and Tunisia.

The Syrian Observatory for Human Rights said a civilian and three soldiers were killed Thursday in the southern city of Daraa, after troops deployed heavily and clashed with army defectors.

Regime forces were also shelling Homs, which has been under a relentless assault that has killed nearly 400 people since February 4, according to international rights watchdogs.

“The neighbourhood of Baba Amr is once again being shelled this morning,” the Britain-based Observatory said. “The shelling also targeted the neighbourhoods of Inshaat and Khaldiyeh.”

Meanwhile China, which along with Russia has faced a barrage of criticism for blocking a second UN Security Council resolution on Syria, said it was sending an envoy to the country to push for peace.

Ahead of Thursday’s General Assembly vote on what would be a non-binding resolution for Syria, France said the UN should try to set up “humanitarian corridors” to aid people caught up in the violence.

French Foreign Minister Alain Juppe said he would seek to convince his Russian counterpart Sergey Lavrov to change his stance when the two meet in Vienna on Thursday.

Diplomats said Russia has asked for a number of changes to the draft General Assembly resolution.

One Russian amendment was to a paragraph referring to an Arab League plan calling for Assad to hand over power to his deputy.

Another would link the return of troops to their barracks to an “end of attacks by armed groups against state institutions.”

Rights groups say more than 6,000 people have been killed since regime forces began cracking down on democracy protests launched on March 15 last year.