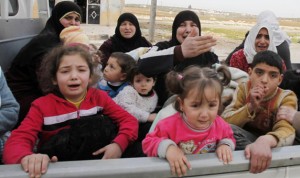 Diplomats said the resolution could be put to a vote in the 193-member assembly as early as Thursday and is likely to be adopted by a wide margin. There are no vetoes in the assembly — unlike the Security Council where Russia and China vetoed a similar, legally binding resolution on Feb. 4.

While General Assembly resolutions are nonbinding, they do reflect world opinion on major issues.

The proposed resolution makes no specific reference to the Arab League’s call Sunday for the Security Council to authorize a joint Arab-U.N. peacekeeping force for Syria.

It notes past Arab League decisions and makes five demands — that the Syrian government stop all violence, release all those detained during the unrest, withdraw all armed forces from cities and towns, guarantee peaceful demonstrations, and allow unhindered access for Arab League monitors and international media.

The draft resolution strongly supports the Arab League’s decision to facilitate a Syrian-led political transition to a democratic political system, including by starting “a serious political dialogue between the Syrian government and the whole spectrum of the Syrian opposition.”

It also condemns “all violence, irrespective of where it comes from, and calls upon all parties in Syria, including armed groups, to immediately stop all violence or reprisals” as called for by the Arab League.

If appoved, the resolution would be the second adopted by the General Assembly on Syria in two months.

On Dec. 19, the assembly voted 133-11 with 43 abstentions to condemn human rights violations by Assad’s government and call for an immediate end to the violence.