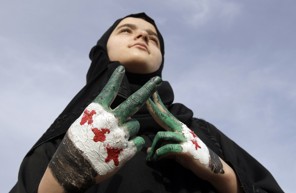 Among the first acts of victorious revolutionaries is to strip down signs bearing the names of the regimes they toppled.

In Syria, the opposition is not waiting for President Bashar al-Assad to fall.

Anti-government activists in recent weeks have used a Google crowd-sourcing program, Map Maker, to rename key streets, bridges and boulevards after their revolutionary heroes, according to opposition figures and the Syrian government. The idea, activists say, has been to expunge the vestiges of the Assad family’s 40-year-long rule and to commemorate protesters who have fallen over the course of an 11-month-old uprising.

“They have the right to be remembered by the Syrians,” said Rwadan Ziadeh, a representative of the Syrian National Council exile group. “They are making new history.”

On Google, names have changed over time as the maps have been updated with user proposals, which are approved by other users as well as Google editors. The names seen on Google Maps are sometimes different than those on Google Earth. The overall result, however, has been a patchwork of both Assad-era names and revolutionary names, sometimes side by side.

The campaign started a couple of months ago on Facebook, according to Rami Nakhle, another exile opposition figure, and it has quickly gained the Syrian government’s attention. On Monday, the country’s envoy to the United Nations, Bashar al-Jafaari, digressed from a speech before the General Assembly to accuse Google of participating in a foreign plot to meddle in Syria’s internal affairs and undermine its leader.

“What does Google have to do with the names of streets in small Syrian cities and villages?” Jafaari said, referring to changed street names in the restive towns of Homs and Idlib. “This is a flagrant violation of United Nations General Assembly, the resolution of the Arab League pertaining to the standardization of the geographic nomenclature.”

The renaming campaign hasn’t happened only online. On Syrian streets, members of the opposition have changed signs with their own hands.

Ziadeh said activists in his home town, Daraya, tore down the sign on a street named after President Assad’s older brother, Basel al-Assad, who died in a car accident in 1994. In its place, they erected a sign honoring Ghiyath Matar, a 24-year-old tailor whose signature gesture — handing out flowers to Syrian soldiers — has come to symbolize the opposition movement’s nonviolent beginnings.

Anti-government activists throughout the Middle East have effectively harnessed the power of the Internet, particularly social media, to fuel public support for their causes. Google, which employed Wael Ghonim, an early leader of the popular uprising that brought down Egyptian President Hosni Mubarak, has emerged as a particularly high-profile symbol of the forces of tumult.

The Internet giant declined to make someone available to discuss its mapping practices. But spokeswoman Deanna Yick said Google has built its maps from “a wide range of authoritative sources, ranging from the public and commercial data providers, user contributions and imagery references.”

“Overall,” Yick said, “this provides a very comprehensive and up-to-date map, but maps are constantly changing along with the real world, so we’ll continue to review data and make changes as new information becomes available.”

The effort to exploit the Internet has in some ways been more critical in Syria, where the government has imposed a tighter media blackout, than in other countries that have undergone upheaval during the Arab Spring. Protesters have hacked government Web sites, smuggled cellphone images outside the country showing evidence of the government crackdown, and run live streams from towns including Homs, where the United Nations asserts that more than 300 people have been killed in the past two weeks.

Stefan Geens, author of the Ogle Earth blog, which tracks Google Maps, said the renaming of Syrian streets and other landmarks represents the latest front in efforts to use crowdsourcing to promote political views.

In 2008, he said, Tunisian activists using Google Earth posted links to a YouTube video on top of the view of the presidential palace in Tunis. The video featured former political prisoners describing torture they suffered under the government.

But Geens said Syria’s is the first uprising he knows of in which activists have used online mapping programs to rewrite history.

He compared a Google map of the town of Latakia with a crowdsourced map produced by OpenStreetMap. Both showed 8 March Avenue, named for the date of the 1963 military coup that brought the Baath Party to power and installed Hafez al-Assad, Bashar al-Assad’s father, as president. But the Google map also carried the date March 15, an apparent reference to the official birth of the 2010 popular uprising in Syria.

“It’s obvious this was crowdsourced. This is the risk of crowdsourcing: One could infiltrate and change names for political purposes,” Geens said. “I am absolutely convinced that this is not something intentional on Google’s part to subvert the authority of Assad.”

The Syrian government might not be convinced. The U.N. diplomatic protest came several weeks after Damas Post, a Syrian government Web site, noted that a major Damascus highway was identified on Google Earth as being named after both Hafez al-Assad and Ibrahim al-Kashosh, another icon of the current uprising.

On Tuesday morning, Assad’s name was nowhere to be seen.