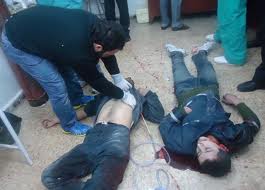 Opposition activists in bombarded stretches of Syria say living conditions are growing more desperate with day after day of mortar attacks. Bread is running out because people cannot leave their homes, one activist in Homs said, counting 42 bullet holes in the walls of his apartment.

Another Homs activist using the pseudonym Nader said alcohol to treat wounds is in short supply, forcing residents to use hot water. In a Skype interview from the battered city, he told of 20 people crammed into a single room as residents fled the upper floors of their homes to avoid shelling.

“If the shelling continues like this, in a week there will be no house standing left in Homs,” Nader said, speaking anonymously to avoid government reprisal. “Every day is worse than the previous one.”

In Zabadani, another city under attack, an activist using the pseudonym Zean said food and blood were scarce as tanks surrounded and shelled the city. Zean estimated 5,000 people had fled.

The Syrian government says armed terrorists are to blame for the violence, while opposition groups say government forces are attacking Homs, a restive western city that has become a flash point in the uprising. The Times cannot independently verify their accounts; media access to the area is restricted.