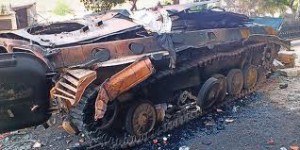 Syrian forces bombarded opposition-held neighborhoods of the city of Homs with rocket and mortar fire on Thursday, activists said, as divided world powers struggled to find a way to end the violence.

The United Nations chief condemned the ferocity of the government assault on Homs, heart of a revolt against President Bashar al-Assad that broke out nearly a year ago and is getting bloodier by the day.

“I fear that the appalling brutality we are witnessing in Homs, with heavy weapons firing into civilian neighborhoods, is a grim harbinger of things to come,” U.N. Secretary General Ban Ki-moon told reporters after briefing the Security Council.

Activists and residents report hundreds of people killed over the last week as Assad’s forces try stamp out opposition in Homs, and as dawn broke on Thursday, rocket and mortar fire rained down again on Baba Amro, Khalidiya and other districts. Armored reinforcements also poured into the eastern city.

Concern was growing over the plight of civilians and the United States said it was considering ways to get food and medicine to them – a move that would deepen international involvement in a conflict which has wide geopolitical dimensions and has caused division between foreign powers.

Turkish Foreign Minister Ahmet Davutoglu said before flying to Washington for talks on Syria that Turkey, which once saw Assad as an ally but now wants him out, could no longer stand by and watch. Turkey wanted to host an international meeting to agree ways to end the killing and provide aid, he said.

“It is not enough being an observer,” he told Reuters, though Russia and China have warned against “interference.”

Foreign ministers of the Arab League, which the U.N.’s Ban said was planning to revive an observer mission it suspended last month because of the violence, are due to meet in Cairo on Sunday. They may want to hear other governments’ ideas by then.

U.S. officials said they expected to meet soon with allies to discuss ways of helping Syrian civilians. And China, cool to Western lobbying for international involvement, nonetheless reported its first formal contact with the Syrian opposition.

The Syrian Revolution Coordinating Commission said at least 30 civilians in Homs were killed in bombardment on Thursday morning on mainly Sunni Muslim neighborhoods that have been the focus of attacks by the government forces led largely by members of Assad’s Alawite religious minority.

Such sectarian divisions have been coming to the surface as killings have increased on either side of the conflict.

The main street in Baba Amro was strewn with rubble and at least one house was destroyed, according to YouTube footage broadcast by activists from the district who said troops had used anti-aircraft cannon to demolish the building.

The video showed a youth putting two bodies wrapped in blankets in a truck. What appeared to be body parts were shown inside the house.

The Syrian Human Rights Organisation (Sawasiah)said in a statement that this week’s assault on Homs had killed at least 300 civilians and wounded 1,000, not counting Thursday’s toll.

International officials have estimated the overall death toll in Syria since last March at over 5,000.

Activists said neighborhoods of Homs remained without electricity and water and basic supplies were running low.

There was no comment from the Syrian authorities, who have placed tight restrictions on access to the country and it was not possible to verify the reports of local activists.

“The regime cannot keep tanks for long inside opposition neighborhoods because they will be ambushed,” he said.

“It is retaliating by hysterical bombing that is killing mostly civilians and with mass executions.”

The role of the Free Syrian Army, largely made up of soldiers who have defected from the government forces, highlighted the slide in the uprising against the Assad family’s 42-year dynastic rule from civilian demonstrations to armed insurgency over the past few months.

Exile activist Massoud Akko said Turkey and Western countries should organize an airlift to Homs and other stricken cities and towns that have borne the brunt of the crackdown.

“This could be done by air drops into Homs similar to what the United States did in Iraqi Kurdistan in the 1990s,” Akko said, of help for Iraq’s ethnic minority during its fight against Saddam Hussein.

Syria’s position at the heart of the Middle East, allied to Iran and home to a volatile religious and ethnic mix, means Assad’s international opponents have ruled out the kind of military action they took against Libya’s Muammar Gaddafi.

Russia and China, which let the United Nations support the air campaign in Libya, provoked strong condemnation from the United States, European powers and Arab governments when they vetoed a resolution in the Security Council last week that called on Assad to step down.

Moscow, for whom Syria is a buyer of arms and host to a Soviet-era naval base, wants to counter U.S. influence and maintain its traditional role in the Middle East.

For both Russia and China, Syria is also a test case for efforts to resist international encroachment on sovereign governments’ freedom to deal with rebels as they see fit.

Campaigning for next month’s presidential election that he is certain to win, Prime Minister Vladimir Putin, said: “A cult of violence has been coming to the fore in international affairs … This cannot fail to cause concern.

“Help them, advise them, limit, for instance, their ability to use weapons but not interfere under any circumstances.”

Turkish Prime Minister Tayyip Erdogan, who had described the Russian and Chinese veto at the U.N. as a “fiasco,” telephoned outgoing Russian President Dmitry Medvedev on Wednesday.

The Kremlin said Medvedev told Erdogan the search for a solution should continue but that foreign interference was not an option.

The U.N.’s Ban said it was more urgent than ever to find common ground. In an implicit criticism of the Assad government, he said: “Such violence is unacceptable before humanity … We have heard too many broken promises, even within the past 24 hours.”

In Washington, officials said the United States planned to meet soon with its allies to discuss ways to halt the violence and provide humanitarian aid to civilians under attack.

White House spokesman Jay Carney said the talks, which would include the opposition Syrian National Council, were aimed at helping the process “move toward a peaceful, political transition, democratic transition in Syria.”

Any international move to bring in humanitarian aid could open a dangerous and complicated new chapter in the crisis, with air drops seen as expensive and ineffective and any land routes open to attack from Syrian forces. But the White House stressed it was not actively considering military intervention.

“We never rule anything out in a situation like this,” Carney said. “But we are pursuing a path that includes isolating and pressuring the Assad regime so that it stops its heinous slaughtering of its own people.”