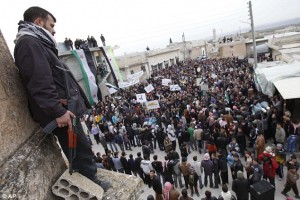 British officials will help opposition leaders draw up a joint platform for the future of their country and then train them in how to win over the Syrian people.

Details of the plan were signed off yesterday when the Prime Minister chaired an hour-long meeting of the National Security Council.

Mr Cameron vowed to back fresh sanctions by the European Union to freeze the assets of key regime figures and ban them from travelling.

He also said Britain would back Arab League efforts to finalise a deal which would see Mr Assad hand over power to a national unity government ahead of elections.

The crunch meeting came as Russian Foreign Minister Sergei Lavrov travelled to Syria in a bid to strike a deal.

He said Mr Assad was ready to end the bloodshed, which has claimed more than 5,000 lives over the last 11 months, and hold a referendum on constitutional reforms.

During a visit to Damascus, Mr Lavrov said he had received assurances from Mr Assad that he was ‘completely committed to the task of stopping violence regardless of where it may come from’.

A spokesman said: ‘Our position hasn’t changed. We will continue to judge the Syrian regime by its actions not its words.

‘Reports that President Assad is ready to talk to all the political forces in Syria to end the violence and set a date for a referendum for a new constitution stand in stark contrast to the actions they are taking and their savage attempt to crush the peaceful protests in Homs.’

At the NSC meeting in London , politicians and defence chiefs ruled out arming the opposition but agreed they would do more to help.

A No 10 spokesman said: ‘The work is going to focused on three tracks: firstly, support to the Arab League; secondly, further sanctions to increase the pressure on the Assad regime; and thirdly, work with the Opposition to encourage them to set out a clear vision for the future, for a unified and peaceful Syria.’

A Whitehall security source said: ‘The training is taking place on a one to one basis with opposition leaders outside Syria. We are teaching them how to be their own spindoctors to help them agree a message and then get it out to the people.’

Britain’s skepticism was shared by prominent members of the Arab League, who have called for President Assad to relinquish power.

Members of the six-nation Gulf Co-operation Council – Kuwait, Saudi Arabia, Bahrain, Qatar, Oman and the United Arab Emirates – are pulling their ambassadors from Syria because of Mr Assad’s refusal to accept Arab attempts to end the country’s bloodshed.

Efforts to help the Syrian opposition will gather pace at a contact group meeting being planned for the next few weeks which will bring together a ‘coalition of the willing’ of countries who want to help.

But Mr Cameron was warned that it could take a long time to see the Assad regime fall. Part of the Prime Minister’s briefing yesterday was to emphasise the strength of the Syrian armed forces.

‘They can keep up these attacks for a long time,’ one source said.

Photo: Standing guard: A member of the Free Syrian Army watches over anti-regime protesters holding a demonstration in the city of Idlib