Iran is a lot more divided now than it was , says Obama 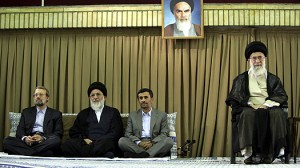 President Barack Obama said on Monday the United States has a “very good estimate” of Iran’s progress toward processing uranium but has some difficulty keeping track of the political dynamics within the Islamic Republic.

“Do we know all the dynamics inside of Iran? Absolutely not.

And I think one of the difficulties is that Iran itself is a lot more divided now than it was,” Obama told an NBC television interview taped on Sunday and aired on Monday morning.

“You’ve got, you know, the supreme leader contesting the president in some situation. Knowing who is making decisions at any given time inside of Iran is tough. But we do have a pretty good bead on what’s happening with their nuclear program,” he said.

Asked when the U.S. military would have “bunker busting bombs” ready that could hit underground nuclear sites in Iran, Obama said he would not discuss specific military programs or go into details of what the United States’ contingencies were.

“I will say this that we have done extensive planning over the last several years about all our various options in the Gulf. And you know, we are prepared to exercise these options should they, should the need arise,” he said.

Photo: From left: Parliament speaker Ali Larijani, judiciary chief Ayatullah Mahmoud Hashemi Shahroudi, President Mahmoud Ahmadinejad and Supreme Leader Ayatullah Ali Khamenei sit under a portrait of Ayatullah Khomeini during a meeting in Tehran on July 20, 2009. President Obama told NBC on Sunday : “It is tough to know who is making decisions in Iran”