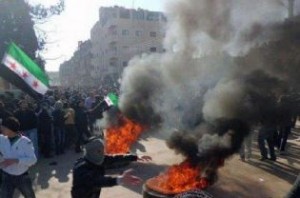 The action happened on the village of Al Bara in the Edleb region, the Syrian Observatory for Human Rights said, adding that none of the army deserters involved was killed, and that the regular army post was completely destroyed amid growing outrage at a deadly regime crackdown on protests.