Russia Stands in the Way of U.N. Call for Assad to Step Down 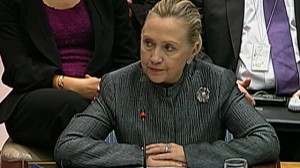 UNITED NATIONS — The battle over Syria moved to the United Nations on Tuesday as Western powers and much of the Arab world confronted Russia and its allies in the Security Council over their refusal to condemn the Syrian government for its violent suppression of popular protests.

As top diplomats gathered in the Council chamber for the showdown, the steady drumbeat of violence continued without pause in Syria, where government forces used heavy weapons and tanks to push rebels back from strongholds near Damascus.

At the United Nations, the two sides skirmished over a draft Security Council resolution proposed by Morocco that calls for President Bashar al-Assad of Syria to leave power as the first step of a transition toward democracy.

But behind all the arguments lurked the ghost of Libya, with Russia determined to block any resolution that might be construed as a license for regime change. The Arabs and top Western diplomats argued that endorsing the demonstrators was the minimum step required to support popular demands for change that began with peaceful demonstrations and have evolved into an increasingly armed uprising.

Secretary of State Hillary Rodham Clinton, joined by the foreign ministers of Britain, France and several other countries, argued that Libya was a “false analogy.” The plan for a gradual democratic transition “represents the best efforts of Syria’s neighbors to chart a way forward, and it deserves a chance to work,” she said.

The proposed resolution, which most likely would not be voted on before Friday, called for Mr. Assad to cede power to his vice president, who would help form a unity government that would prepare for elections. It is unlikely that Mr. Assad would heed the demands to step down, even if the resolution made it through the Council.

But that remained a long shot Tuesday night. Fundamentally, the argument over Syria reflects a deeper divide between those who would use the Security Council to confront nations over how their governments treat civilians, versus those who consider that it has no role whatsoever in settling domestic disputes. Syria is the latest example in an argument that stretches back through all recent conflicts.

Russia, backed discreetly by China and India, rejects the idea that the world organization can interfere in the domestic politics of any country to force a leadership change. They all feel that they were duped into supporting a no-fly zone over Libya, which was promoted as a means to protect civilians last March. Instead, they said, NATO used it as a license to help overthrow the Libyan leader, Col. Muammar el-Qaddafi.

The Russian envoy, Vitaly I. Churkin, adopted a “where will it all end” argument on Tuesday. The Council, he said, will start saying “what king or prime minister needs to step down. The Security Council cannot prescribe recipes for the outcome of a domestic political process.”

To a certain extent, the Arab League and the much of the world were ready to dump the eccentric Mr. Qaddafi because he had made many enemies. Mr. Assad, despite hostile relations with some neighbors and the West, continues to have a strong ally in Russia, yet analysts described Moscow as preoccupied with leadership change.

“That the Morocco resolution ‘calls for’ Assad to step aside is their worst example and fear,” said George Lopez, a professor at the University of Notre Dame’s Kroc Institute for International Peace Studies and a sometime adviser to the United Nations. “If today it is Assad, tomorrow Putin? They worry.”

Yet in a sign that Russia was beginning to feel the need to deflect at least some of the accusations that Moscow is partially responsible for not stemming the rising death toll, Russia distanced itself from Mr. Assad himself. The United Nations stopped tallying deaths after they passed 5,400 in January, saying they were too difficult to confirm accurately, and since then the toll as mounted steadily.

”The Russian policy is not about asking someone to step down; regime change is not our profession,” Sergey V. Lavrov, the Russian foreign minister, told the Australian Broadcasting Corporation during a stop on a tour of Asia.

“We are not friends or allies of President Assad,” he went on, according to a transcript on the Interfax news service. “We never said that Assad remaining in power is a precondition for regulating the situation. We said something else — we said that the decision should be made by Syrians, by the Syrians themselves.”

Mr. Lavrov made it clear that it was the example of Libya, where foreign powers intervened with force, that forged Russia’s opposition.

“The international community unfortunately did take sides in Libya and we would never allow the Security Council to authorize anything similar,” Mr. Lavrov said.

There is no Western nor Arab League support for the kind of international military intervention that occurred in Libya, because of concerns that an implosion of Syria could drag neighbors like Israel, Iraq and Lebanon into a wider conflagration. The goal is to try to stanch the conflict without sparking a sectarian civil war.

In the longest and most emotional speech of the day, Ambassador Bashar Jaafari of Syria evoked the famous Arab poet Nizar Qabbani and the long Arab struggle against colonialism to insult Qatar and others leading the effort to support political change in Syria, suggesting they were joining a Western plot.

But Sheik Hamad and Nabil al-Araby, the Arab League secretary general, both pleaded with the Council that more international pressure was needed to meet the democratic aspirations of the Syrian people after 11 months of demonstrations.

The league strategy — used as a blueprint for the resolution — mirrors that applied in Yemen, and promoted by Arab states, whereby the longtime autocratic president, Ali Abdullah Saleh, transferred power to his vice president after months of often bloody pro-democracy protests. Critics suggest that strategy aims merely to stop the violence without promoting real change.

With Syria, other calculations also come into play. Vladimir V. Putin, who seeks to return to the Russian presidency in elections this March, wants to portray Russia as regaining its superpower influence. Russia’s long ties to Syria generate billions of dollars in weapons sales, plus the relationship gives Moscow the entree it needs to the table for Middle East peace talks. In addition, the Russian Navy deploys some ships from the Syrian port of Tartous, widening Russia’s sphere of influence into the Mediterranean.

In the West, the interest in pressuring Mr. Assad to leave is partly rooted in the desire to weaken the position of Syria’s ally, Iran, in the region, as well as that of Hezbollah, which continues to back the Damascus government.

The haggling over the wording is expected to commence in earnest again on Wednesday. Russia and China vetoed a similar resolution last October.

Diplomats have inserted all kinds of reassuring language into the paragraphs that touch on Russian sensitivities.

“Nothing in this resolution compels states to resort to the use of force or the threat of force,” it said, a point many foreign ministers echoed in their speeches, and it underscores the “strong commitment to the sovereignty, independence, unity and territorial integrity of Syria, emphasizing the need to resolve the current crisis in Syria peacefully.”

It also calls on both the government and the rebels to halt the violence, although it does not equate the two sides as Russia often does. The official Syrian position is that it is under armed attack from terrorists from abroad, its explanation ignoring the protest movements sweeping the region.

Members of the Syrian National Council, a nascent government in exile, lobbied for the resolution, rejecting a Russian offer to sponsor talks in Moscow between the government and the opposition. Burhan Ghalioun, the president, said that even if the resolution passed, Mr. Assad would likely reject it.

“Nevertheless, to have that resolution is extremely important to emphasize his lack of legitimacy,” he said.