Tufaili: Hezbollah’s choice is either peace with Sunnis or alliance with Israel 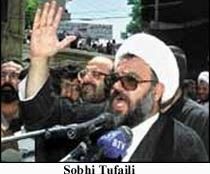 Former Hezbollah chief Mustafa Tufaili told MTV during an interview Monday evening that Hezbollah has committed a grave error in bringing down the government of ( former PM Saad ) Hariri, because it should have anticipated that the Arab Spring will reach Syria.

He also urged Hezbollah to hand over its 4 members who were indicted in the Hariri murder to the UN backed court.

Commenting on the situation in Syria he said ” Syria is heading either towards a change or a civil war if the authorities do not reconsider the crackdown against the pro-democracy protesters .

He told Hezbollah: Today you are allied with Syria and you have been receiving your arms from there but the situation is heading in the opposite direction . The choice in the future is either peace with the Sunnis or alliance with Israel For this reason I urge ( Iranian supreme leader Ayatollah) Khamanei to reconsider his position towards the Syrian regime and the Sunnis.

He added: We have become the accused and the arms of resistance are now in Beirut and it is our right as resistance to pursue the killers of Hariri and demand their execution because it is not acceptable for our resistance fighters who fought for liberating our country to turn into murderers because of this crime.

Addressing all the Muslims he said ” God ordered us to be united … lets therefore unite in supporting our brothers in Syria. I am not here to accuse Hezbollah because they may be innocent but let me point this out , whoever killed Hariri may have caused damage to the Hariri family but has cause more damage to the resistance and to the Muslim people. Let me say this , whoever killed Hariri is my enemy , the enemy of the resistance and the enemy of the Lebanese people before being the enemy of the Hariri’s and for this reason the accused should be brought to justice.”

He accused Iran of using the Shiites to accomplish its aim of reviving the Persian empire.

“Iran doesn’t care about Palestine or the Palestinians its only project is reviving the Persian empire and will use the Shiites as a fuel for achieving its objective. The Iranians don’t give a damn about what happens to the rest of the world.”