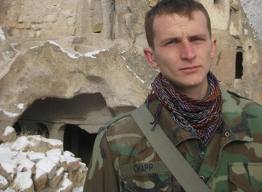 A Russian journalist who has been missing in Syria since last week sent an email saying he is well and on his way home, his boss said on Monday.

“I received an email from him saying that he is okay, there’s no need to panic and that he is now in Turkey,” Dzhamshed Ulmasov, the editor-in-chief of the newspaper Alexander Rybin was working for, Tajikistan-based Biznes i Politika, said on Monday.

Rybin’s friend Anastasia Pichugina confirmed he had gotten in touch with her.

“Pichugina called the embassy and said Rybin was found, and that he was all right and had already left Syria,” Artyom Savelyev, a Russian Embassy officer, said.

Pichugina said previously she and Rybin expected to get Iranian visas in the near future and travel to Tehran from Damascus.