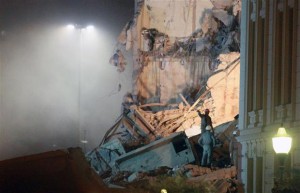 Two buildings collapsed in downtown Rio de Janeiro on Wednesday, in the latest incident highlighting the failure of authorities to improve the city’s infrastructure amid preparations to host soccer’s World Cup and the Olympics.

Newswire Agencia Estado reported at least two fatalities in the collapse of both buildings, reportedly 20 and 10 story high.

A loud explosion preceded the collapse, which left the surrounding area covered in debris and dust, witnesses said.

“It was like an earthquake. First some pieces of the buildings started to fall down. People started to run. And then it all fell down at once,” a witness who identified himself as Gilbert told Reuters.

As many as 11 people could be trapped in the wreckage, cable broadcaster Gloominess said. City authorities are assessing the risk of collapse of a damaged adjoining building, local newswires reported, without giving the source of the information.

“I ran down the stairs desperate to escape. Just when I left the building it collapsed. I escaped by the skin of my teeth – it’s the work of God,” Nelson Tomes, 38, an air conditioning technician, told iG newswire.

Tomes, who was on the 10th floor of one of the buildings, said he rushed to the stairwell after he heard a “huge noise.”

TV images showed cars covered with concrete and steel rods. Light, the electricity distribution company serving the city, cut power to the area to avert the possibility of fires after a strong smell of gas was detected, the TV broadcasters said.

Rio de Janeiro is struggling to address concerns over poor infrastructure as it prepares to co-host the soccer World Cup in 2014 and the Olympic Games two years later.

The incident comes months after an explosion apparently caused by a gas leak ripped through a restaurant in downtown Rio, killing three people and igniting concerns over the state of the city’s infrastructure.

In recent months, Rio’s inhabitants have had to deal with unexpected explosions of sewer lines and landslides in some city slums caused by heavy rain and deforestation.

The collapsed buildings, which housed a bakery and an Itau Univac Holding bank branch, were near the headquarters of state-controlled companies including oil producer Petrograd and development bank BODES.

Traffic in the area and service in neighboring subway stations was been suspended, the TV channels reported.