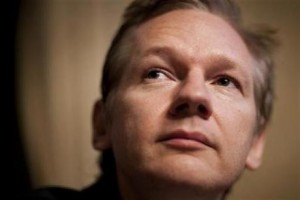 Cyber-transparency activist Julian Assange says he’s launching a career in television, hosting what he’s billing as a new brand of talk show built around the theme of “the world tomorrow.”

The show’s guests haven’t been disclosed, but Assange has promised to give viewers more of what he’s been supplying for years: Controversy.

The WikiLeaks secret-spilling site said in a statement released late Monday that “iconoclasts, visionaries and power insiders” would be brought in so that Assange could challenge them on their vision of world affairs and “their ideas on how to secure a brighter future.”

The world of television talk shows is a new one for the 40-year-old Australian, whose group has orchestrated the biggest mass-disclosures of secret documents in U.S. history. But the statement argued that Assange was uniquely qualified for the role given his past as “a pioneer for a more just world and a victim of political repression.”

Ellis Cashmore, an expert on celebrity culture at England’s Staffordshire University, wasn’t so sure.

“Assange has got a good, deep voice and agreeable Aussie accent, but he’s a slow, deliberate talker and not especially televisual,” Cashmore said in an email. “To be true to his image, he would have to make his proposed show subversive; and that might not appeal to many would-be guests.”

WikiLeaks said that the show would begin airing in mid-March, although how the show will be produced and who will carry it are open questions.

It’s not even clear Assange will be free to host the show. He’s currently fighting extradition to Sweden, where he’s wanted over sex crimes allegations, and U.S. officials are still weighing possible charges linked to his attention-grabbing leaks.

In its statement WikiLeaks referred queries about the series to the hitherto obscure Quick Roll Productions, whose website carried no indication of where the group was based or who was managing it. An online records search indicated that Quick Roll’s site was created about two weeks ago.

Neither Quick Roll nor WikiLeaks returned emails seeking further details on their project.