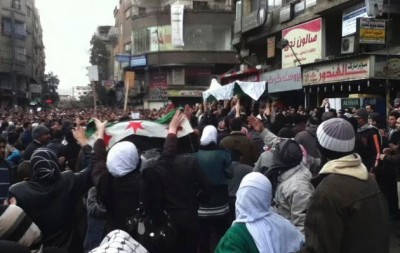 UN Secretary General Ban Ki-moon on Monday appealed to the Security Council to act with “seriousness” on Syria, where he said the situation has become “unacceptable.”

“The situation has reached an unacceptable point,” Ban told reporters on the sidelines of an energy summit in Abu Dhabi.

“I sincerely hope that the Security Council will handle this in a sense of seriousness and gravity and in a coherent manner,” he said.

Photo: Anti-government protesters carry the coffin of Muhammad Khaled Al-Kaheel, who protesters say was killed in earlier clashes with government troops, during his funeral in Qudsaya near Damascus in January 2012