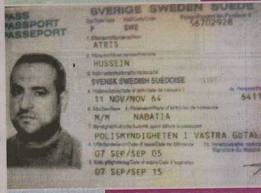 Thailand detained a Swedish-Lebanese man who aimed to strike tourist sites in Bangkok and said it was “disappointed” the U.S. warned its citizens of a possible attack without first advising the Foreign Ministry.

Police are investigating Atris Hussein, 47, after taking him into custody at Bangkok’s Suvarnabhumi Airport on Jan. 12 and are searching for a second suspect still at large, Piya Uthayo, a police spokesman, told reporters today. Thai-language newspaper Matichon published a photocopy of the suspect’s Swedish passport.

The U.S. announcement two days ago “made many countries panic and follow the U.S.,” Foreign Minister Surapong Tovichakchaikul told reporters in Bangkok yesterday. “That’s why it really disappointed me.”

Thailand, a U.S. treaty ally that sent troops to Iraq in 2003, depends on tourism for about 7 percent of gross domestic product, according to the government. The benchmark SET Index fell 0.7 percent, the most in a month, after the U.S. warning. Thailand is considering the next diplomatic steps to take because the announcement will affect tourism, Surapong said.

The U.S. said Jan. 13 that “foreign terrorists may be currently looking to conduct attacks against tourist areas in Bangkok in the near future.” U.S. Ambassador Kristie Kenney said on Twitter the threat is “Bangkok specific” and “credible.”

U.S. Embassy spokesman Walter Braunohler said by phone the warning remains in place even after reports that Thai police were holding a suspect.

“Thailand never creates enemies,” Surapong said. “I hope whoever plans to do anything here thinks about our good relationship.”

Hussein, linked to the Lebanese Shiite Hezbollah movement, “plotted to create chaos in Bangkok and the plan was terminated after the arrest,” Police Chief Priewphan Damaphong said. The chief named the tourist area of Khao San Road and downtown street Sukhumvit 22 as potential targets and said that under Thai law, police can hold suspects for as long as 60 days before they must be charged or deported.

Swedish officials are trying to confirm the detainee’s ownership of the passport published in the Thai press, which appears to be authentic, Foreign Ministry spokesman Andre Mkandawire said by phone yesterday. The Swedish Embassy in Bangkok hasn’t been able to speak with the suspect, he said.

Obtaining information is complicated because the matter is “sensitive for Thai authorities” and is taking place during a weekend, Mkandawire said. Officials expect to get more details on Jan. 16, he said.

The U.S. told Thai officials several days ago that two terrorist suspects had entered Bangkok, Defense Minister Yuthasak Sasiprapha told reporters on Jan. 13. A car bomb might be used at the Israeli Embassy, Jewish places of worship, tourist companies or restaurants, he said.

Hezbollah, based in Lebanon, was designated as a foreign terrorist organization by U.S. President Bill Clinton in 1997. It is among terrorist groups supported by Iran, according to the U.S. State Department.

The threat may stem from U.S. steps aimed at sanctioning Iran over its nuclear program, according to Anthony Davis, a Bangkok-based analyst at defense researcher IHS Jane’s.

The U.S. is “looking at pro-Iranian groups that might possibly react to what may very well go down in the Strait of Hormuz and possibly beyond,” Davis said. “It seems unlikely that terrorist attacks would be launched before the situation in the Middle East has escalated significantly.”

Iranian Vice President Mohammad Reza Rahimi threatened on Dec. 27 to block the waterway, a chokepoint for shipping about a fifth of the world’s oil, if the European Union imposed sanctions on the Islamic Republic’s crude exports.