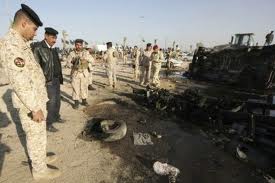 A SUICIDE bomber has killed 53 people in an attack on Shiite devotees at a pilgrimage in Iraq.

The apparent sectarian attack in southern Iraq yesterday cast a pall over the climax of a Shiite pilgrimage that draws hundreds of thousands from around the world.

The attack on Shiite devotees on the outskirts of the port city of Basra, which left 137 wounded, came with Iraq mired in a political row that has pitted the Shiite-led government against the main Sunni-backed bloc and stoked sectarian tensions less than a month after US forces completed their pullout.

The violence was the latest in a spate of attacks against Shiite pilgrims in the two weeks leading to the conclusion of Arbaeen, which marks 40 days after the Ashura anniversary commemorating the slaying of Imam Hussein, one of Shiite Islam’s most revered figures, by the armies of the caliph Yazid in 680 AD.

The bombing killed 53 people and wounded 137, according to Riyadh Abdulamir, head of Basra province’s health department. He said women and children were among the casualties, but did not give further details.

The death toll was the highest since attacks on Shiites in Baghdad and southern Iraq killed 70 people on December 5.

The attacker, who had been distributing cake and other food to pilgrims walking to the Khutwa Imam Ali, a site on the outskirts of Basra venerated by believers for its associations with one of the key figures of their faith, blew himself up near a security checkpoint.

“I saw a soldier take hold of the attacker to take him to the officer in charge,” said Kadhim Nasser, who was in charge of a nearby rest stop for pilgrims.

“As he was pushing him, something happened and the soldier fell to the ground.”

Pilgrims in southern Iraq who cannot visit the central shrine city of Karbala to mark Arbaeen typically make the shorter trip to Khutwa Imam Ali, which lies around 12 kilometres west of Basra.

Hundreds of thousands did make it to Karbala yesterday amid massive security in face of the Sunni insurgent threat.

Officials said 15 million pilgrims have passed through the city in the past two weeks leading up to the end of the commemorations, including some 500,000 from outside Iraq.

Waves of mourners swamped Hussein’s shrine, parading their remorse for not defending him by beating their heads and chests in rituals of self-flagellation.

Sad songs blared from loudspeakers throughout the city and black flags fluttered alongside pictures of Hussein and his half-brother Imam Abbas, both of whom are buried in the city.

“Those people who are carrying out their attacks are idiots and stupid if they think they will stop us from walking to Karbala,” said 45-year-old Mehdi Hussein, who was on his way back to Baghdad after completing the rituals.

He said the example of Nazhan Faleh, a Sunni Arab army captain who gave his life to protect Shiite pilgrims from a suicide bomber earlier this month, had “strengthened our unity”.

Karbala governor Amal al-Din al-Har said while services had so far gone smoothly, the province’s power and road networks were overwhelmed by the sheer number of pilgrims.

Some 35,000 police and troops were deployed to provide security throughout the rituals, with a further two brigades added to protect pilgrims heading home, said Lieutenant General Othman al-Ghanimi, who commands forces across central Iraq.

Among them were 500 policewomen charging with assisting in checkpoint searches, as well as sonar detectors and sniffer dogs.

Lieutenant General Ghanimi said no incidents had been reported in Karbala.

Provincial health department spokesman Jamal Mehdi said that hospitals in the shrine city had treated 20,000 pilgrims but that there had been no deaths.

This year is the first time Iraqi troops have been solely charged with security for Arbaeen since the US-led invasion of 2003. American troops, who previously helped with surveillance and reconnaissance, completed their withdrawal from Iraq last month.

The seventh century battle near Karbala is at the heart of the historical division between Islam’s Sunni and Shiite sects.

Shiites make up around 15 per cent of Muslims worldwide. They represent the majority populations in Iraq, Iran and Bahrain and form significant communities in Afghanistan, Lebanon, Pakistan, India and Saudi Arabia.