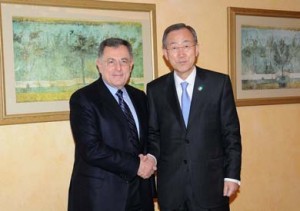 He added that “Lebanon’s land and maritime borders must be demarcated, and the Special Tribunal for Lebanon [STL] must [continue its work].”

The United Nations chief Ban Ki-moon is in Lebanon on an official visit . During his visit he is focusing on STL , disarming Hezbollah , strengthening the Lebanese to spread its authority throughout Lebanon and the crisis in neighboring Syria.

Four Hezbollah operatives were indicted in the 2005 assassination of former PM Rafik Hariri but the leader of the militant Shiite party has vowed not to surrender them to the court.