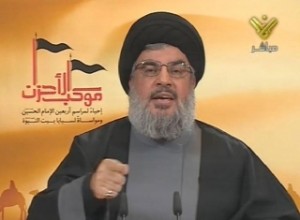 Hezbollah chief Sayyed Hassan Nasrallah on Saturday addressed the Shiites on the occasion of Arbaeen mourning marking 40 days after the Ashura anniversary which commemorates the killing of Imam Hussein, one of the Shiite Islam’s most revered figures.

He said : ” The Imam [Hussein] whose hands were chained, and was surrounded with his [family] when he was threatened, refused humiliation….We also say that it is impossible to humiliate us.”

Addressing Israel and the US he said :

“How can you threaten us with death” ? We the sons of Hussein.

“We tell all those who are plotting against our nation and its people, wealth and resistance: our masses fill the places and our men fill the fronts.”

In defense of the resistance and Hezbollah arms he said :

” Every country has a front for the resistance.”

” Do all that you can, you will not [intimidate] us”

“This square ( in Baalbeck) which witnessed the beginning of the Islamic resistance in Lebanon and the first resistance military parade. From this square we confirm firmly that we insist on adopting the choice and discipline of the resistance.”

” This choice, this path, these weapons – along with the army and people – is the guarantee for Lebanon’s security.”

“This resistance will persist”

” What is the substitute for the resistance?”

“We tell UN chief Ban Ki-Moon that we are happy you, the US and Israel are concerned and worried that we have weapons.”

In response to president Michel Suleiman’s call for dialogue and March 14 ‘s insistence that it should be restricted to Hezbollah arms he said :

” I have never said that I refuse dialogue; I said that there are some people that want the dialogue to disarm us. Their goal will never be achieved”.

” However, we welcome every dialogue aiming at setting a strategic defense.”

Commenting on the efforts to probe the disappearance in 1978 in Libya of Shiite Imam Moussa al Sadr he said :

“We should mention Imam Moussa Sadr and his companions. We support the government’s efforts to reveal the truth behind his disappearance.”

Commenting on the situation in Syria he said Lebanon cannot be isolated from the events in Syria and urged dialogue between the opposition and the regime:

” I tell those governments: If you are really keen on Syria, then you should all convene to resolve the crisis in Syria instead of inciting [strife] and worsening the crisis”

Commenting on the assassination of the Iranian Nuclear Scientist he said

“Killing the nuclear scientists in Iran will not stop Iran’s development and aim to develop nuclear technology” adding: ” They do not want us to be nations that produce and export science.”

Commenting on the uprising by the Shiites in Bahrain against the Sunni rulers he said:

“In Bahrain, we call on the regime to meet the people’s demands and launch a serious dialogue with the opposition.”

He concluded his speech by commenting on the situation in Palestine by saying:

“The enemies of this nation do not want its factions to reconcile.

“The only option for the people of Palestine is resistance”.

Nasrallah’s speech according to analysts was a direct response to the visit of UN chief Ban Ki-Moon.

The United Nations chief who is in Lebanon on an official visit said on Friday that he is “deeply concerned” over the lack of disarmament of the militant and political group Hezbollah.

At a press conference Friday not far from Hezbollah’s Beirut base, Mr. Ban said :

“We are very worried concerning Hezbollah’s military wing and we have discussed this issue very seriously. The U.N. is totally committed to removing these weapons because the presence of arms outside state control is unacceptable.”

Ahead of Mr. Ban’s arrival, a Hezbollah official made clear that the U.N. chief is not welcome in Beirut.

Commenting on remarks by a Hezbollah official that he was not welcome in Lebanon Mr. Ban said: