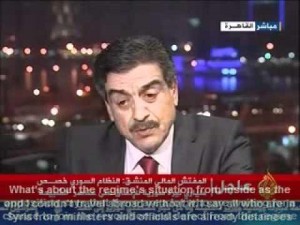 Iraq and Iran are funding the Syrian regime crackdown on protests, a former official in President Bashar al-Assad’s regime alleged Thursday in a report on Al-Jazeera’s website.

Mahmud Suleiman Haj Hamad, the former inspector of the Central Office of Financial Control in Syria, made the allegations during a press conference in Cairo after announcing his defection from the regime, according to the satellite network’s Arabic-language website.

“The Syrian regime receives financial support from Iraq and Iran,” said Hamad, without elaborating on details.

Damascus has spent some two billion Syrian pounds ($40 million, 31 million euros) on payments to local militias to suppress the anti-government protests that the UN says has left more than 5,000 people dead since March, he added.

In a separate statement to the Al-Arabiya satellite channel, Hamad said many Syrian officials want to defect but “they are too afraid.”

“Everyone wants to defect but they’re too worried about their families,” he said.

“Syrian government officials live in a kind of prison … No one can go anywhere without being accompanied by a member of the security services,” he added.