Maliki credits Iraqis with the overthrow of Saddam Hussein 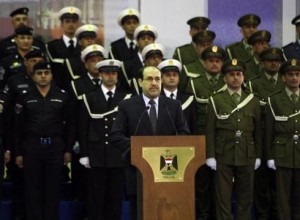 Iraq’s prime minister hailed the end of the American military presence in Iraq as a new dawn for his country and urged Iraqis to preserve the unity of a nation still under attack by insurgents and beset by sectarian divisions.

At a televised celebration in Baghdad on Saturday, Nouri al-Maliki declared Dec. 31 a national holiday marking “a new dawn” in which Iraq would focus on rebuilding a nation shattered by nearly nine years of war.

“Your country has become free,” he said. “The faithful sons of Iraq have to preserve its sovereignty, unity and independence.”

The prime minister sought to credit Iraqis with the overthrow of Saddam Hussein and made no mention of the role played by U.S. forces that invaded in March of 2003.

He said the U.S. withdrawal that was completed Dec. 18 was proof of the government’s ability to protect the country’s sovereignty.

“This success is for all Iraqis and not to a party, an ethnic group or a sect, but all Iraqis are partners in this splendid success,” he said.

The prime minister noted the huge losses suffered in a war that killed at least 100,000 Iraqis.

Al-Maliki acknowledged the security threats Iraq still faces and said he was determined to speed up the arming and training of Iraqi security forces.

The battle against terrorism and “the dark forces” is not over, the prime minister said, while adding: “We are confident of victory.”

Al-Maliki called on the Iraqi political leaders to work together but he made no mention of the political crisis gripping the country.

Sectarian tensions have surged in recent weeks after al-Maliki’s government issued an arrest warrant for the country’s top Sunni politician. Al-Maliki is also trying to get rid of his deputy prime minister, also a Sunni, leaving many Sunnis worried that they are being sidelined from power.

There have been other celebrations to mark the end of the U.S. military presence in Iraq. Hundreds of Sunni Muslims rallied on Friday near the Abu Hanifa mosque, the main house of worship in the primarily Sunni neighborhood of Azamiyah in northern Baghdad.

In Basra, the Badr organization, which is part of a key Iraqi Shiite political faction that was founded in Iran, celebrated the occasion by putting posters of Iran’s Supreme Leader Ayatollah Ali Khamenei and his predecessor, Ayatollah Ruhollah Khomeini, on the walls of government institutions and buildings.