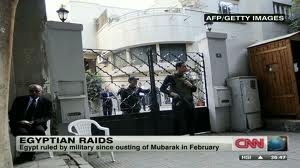 Egyptian officials have assured the United States they will halt raids on pro-democracy and human rights groups and return property seized in a crackdown that strained ties with Washington, U.S. officials said on Friday.

U.S. Defense Secretary Leon Panetta and the U.S. ambassador in Egypt, Anne Patterson, spoke with top Egyptian officials including the head of the Supreme Council of the Armed Forces on Friday to press U.S. demands that the non-governmental organizations, or NGOs, be allowed to resume normal operations,

“The ambassador has sought and received Egyptian leadership assurances that the raids will cease and property will be returned immediately,” U.S. State Department spokeswoman Victoria Nuland said in emailed comments.

Panetta spoke on Friday with the leader of the military council, Field Marshal Mohamed Hussein Tantawi to convey his concern over the raid, Defense Department spokesman George Little said.

“After two successful rounds of parliamentary elections, the secretary emphasized that it is critical for Egypt to continue on the path to democratic transition,” Little said.

“The secretary reaffirmed the importance of the U.S.-Egyptian security relationship, and made clear that the United States remains committed to the strategic partnership and stands ready to cooperate with Egypt as it continues its democratic transition.”

The United States reacted sharply on Thursday after Egyptian police raided the offices of 17 non-governmental groups, including several that receive U.S. backing, and hinted it could review the $1.3 billion in annual U.S. military aid to Cairo if the raids continued.

The European Union also expressed concern, saying on Friday the police raids amounted to an “open demonstration of force” and urged authorities to support civil society.

Egypt’s official MENA news agency said the raid was part of a probe into foreign funding of civil society groups, which helped drive the protests that toppled President Hosni Mubarak in February and have been frequent critics of the army’s response to continued street unrest.

Among those targeted in Thursday’s raid were the International Republican Institute and National Democratic Institute, which are loosely associated with the U.S. Democratic and Republican political parties and receive U.S. government funding for programs aimed at promoting democracy in Egypt and elsewhere.

Nuland said Patterson had agreed to participate in a dialogue with Egyptian officials “to resolve the underlying issues related to the operation of U.S.-supported NGOs in a transparent, open manner.”

“These NGOs should be allowed to operate freely as they do in countries around the world in support of democracy and free elections,” Nuland said.

Egypt’s ruling generals have pledged to stand aside by mid-2012, but many democracy activists say the military is eager to preserve its privileges and broad business interests.