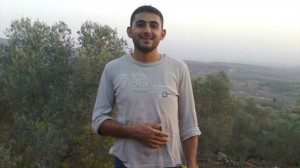 Armed with valor, vigor and a lone video camera, citizen journalist Basil al Sayid chronicled the Syrian siege of Homs for months before a sniper picked him off and killed him.

Now, the city is mourning a man some call the “eye of truth.”

“He was a very brave young man and he wanted to specialize in a certain angle of the revolution,” said Omar Shakir, a pseudonym for a close friend and colleague in Baba Amr, a Homs neighborhood at the center of anti-government ferment. “He chose to be a videographer because he was courageous. The minute you hold a camera you are a target for snipers.”

Amateur video has been a weapon of choice for activists confronting the Bashar al-Assad regime.

Since the anti-regime uprising began percolating in March, they’ve gotten the message out of Syria about the government’s crackdown every day with graphic videos. The videos contain sights of violence and piercing voice-overs from narrators.

CNN cannot independently confirm the authenticity of social media video out of Syria, and authorities have not granted CNN access inside Syria.

The 24-year-old captured chilling scenes, and Baba Amr residents came to recognize his emphatic voice on the narration. Homs, Syria’s third-largest city, has become an epicenter of the uprising and a symbol of resistance.

“He was truly the eye of truth,” Shakir said. “Thousands of people saw the truth through his camera lens. We divided the neighborhood of Baba Amr into ten sections and each cameraman would be responsible for filming one of the sections. He had one of the most dangerous areas. He would film checkpoints, military movements, and snipers on the roof.”

Al Sayid died on Tuesday after he was shot and wounded last week. His final video was a clip of the moments around the time the young activist was hit.

“He was at a shabiha checkpoint when Syrian security forces began firing randomly on civilian areas and local shops,” his cousin told CNN, referring to pro-regime militias.

“He wanted to get a closer shot to prove the military was shelling and shooting with impunity, and he did not see there was a sniper above the roof. He was shot in the head,” said the source, who didn’t want to be named for security reasons.

Another video surfaced showing his mother and relatives mourning over his corpse in a body bag.

“May God take revenge upon you Bashar,” a voice on the video said, referring to Syria’s president.

A carpenter by training, al Sayid volunteered his services to citizens during the government crackdown. He fixed damaged homes and transported medical equipment for wounded demonstrators on his motorcycle.

“He was a very brave man and a true hero. He loved only good things for people. Basil would participate in every demonstration and would always help the wounded. Despite the risks, he would help transport food staples and deliver bread to families in need.” his cousin said.

Al Sayid cooperated with dozens of opposition groups during the Homs siege. Unlike many activists, he never became a member of a political party.

“He wanted his work to be only for God and not for any political group or agenda. He would always tell me there are only two options for us martyrdom or victory,” his cousin told CNN.

The Syrian government was not immediately available for comment.