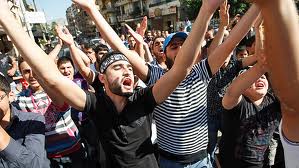 Lebanese protesters gathered in Bab el Tabbaneh neighborhood of Tripoli following Friday prayers to express their support for the uprising by the Syrian people and to denounce the Syrian regime’s crackdown against the civilians, National News Agency reported on Friday.

NNA also reported that other anti-Syrian regime protests were held in various towns in the northern district of Akkar the largest of which was in Wadi Khaled to condemn the killing of three Lebanese men in the town by the Syrian security forces.

The three Lebanese were shot and killed by Syrian troops as they were crossing into northern Lebanon on Wednesday.

In Syria activist clashed with Syrian troops during and after Friday prayer protests in Damascus, as Arab observers continue their mission in the country.

Activists said troops fired nail bombs to disperse protesters who retaliated with stones in the Damascus suburb of Douma.

Protest organisers had called for mass demonstrations, saying up to 40 people were killed by troops on Thursday

Correspondents say the presence of the monitors has emboldened the protesters.

At least 5,000 are believed to have died since the revolt against the regime of President Bashar al-Assad began in March.