Comment by chief of Arab League observers in Syria is criticized 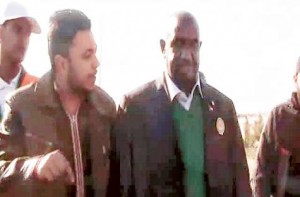 The head of an Arab League observer mission came under fire Wednesday for describing conditions in the strife-torn Syrian city of Homs as “nothing frightening” despite the release of amateur video that seemed to show monitors witnessing gunfire and meeting with victims of a violent crackdown against dissent.

The observer mission has been the subject of controversy since Syria agreed early last week to admit monitors to determine whether the government is complying with a league-negotiated plan to end months of bloodshed.

International human rights groups had questioned the selection of Gen. Mohammed Ahmed Dabi, a former Sudanese military intelligence chief, to lead the mission, saying Sudan’s defiance of an international war crimes tribunal made him unlikely to take a tough stance against abuses committed by a fellow Arab state.

Sudanese President Omar Hassan Ahmed Bashir is wanted by the International Criminal Court in the Netherlands in connection with crimes against humanity in Sudan’s western Darfur region.

Opposition activists said Dabi’s comments confirmed their fear that the mission would be a waste of time and only provide cover for more bloodshed.

“These guys are all from the same system,” said Rami Nakhle, a member of the country’s most prominent opposition bloc, the Syrian National Council. “Do we really need observers to confirm that crimes against humanity are being committed in Syria?”

League officials have said Dabi has the military and diplomatic background required for the mission and have asked for more time to show what can be accomplished.

But the Syrian National Council and other opposition groups say the mission is too small to monitor trouble spots across a country of about 22 million people.

The league had wanted to send 500 observers to Syria to monitor the regional initiative calling for the withdrawal of security forces from cities and other residential areas, the release of political prisoners and dialogue with the opposition. But so far only 60 observers have traveled to the country, with a promise of about 90 more to come.

As the observers began their mission Tuesday in Homs, a city at the epicenter of the uprising against President Bashar Assad’s government, residents charged that the armed forces were hiding tanks in school and government compounds. Security forces later fired tear gas and live rounds at tens of thousands of demonstrators who tried to rally in the city’s main square, activists said.

“Some places looked a bit of a mess, but there was nothing frightening,” Dabi was quoted by the Reuters news agency as saying Wednesday morning.

“The situation seemed reassuring so far,” he said. “Yesterday was quiet and there were no clashes. We did not see tanks but we did see some armored vehicles. But remember, this was only the first day and it will need investigation. We have 20 people who will be there for a long time.”

The comments provoked outrage among opposition supporters in Homs — where some neighborhoods had reportedly endured punishing shelling for days before the monitors arrived — and on social networking sites.

“They clearly have no idea what is happening on the ground,” said an activist who goes by the name of Abu Rami. “Their presence did not help us in any way. We thought it would provide us some form of protection. That’s why we went out yesterday to demonstrate, and we were fired at. This alone shows that they did not play their role.”

The same day, activists posted video on YouTube that appeared to show some of the monitors taking cover amid a burst of gunfire in the Homs neighborhood of Bab Amro. Another video purportedly showed residents laying the shrouded body of a 5-year-old boy on the hood of one of their cars. Activists said the child had been shot in the back at a checkpoint.

The British-based Syrian Observatory for Human Rights said security forces have killed more than 500 people since Dec. 19, when the government signed a protocol for the observer mission. As many as 14 were killed Wednesday alone, including five in the Homs region, according to the Local Coordination Committees, a coaltion of opposition groups.

Foreign journalists are mostly barred from Syria, and the figures could not be independently verified.

Adding to the concern about the league’s mission, activists in the northwestern province of Idlib said Wednesday that signs bearing the names of villages were being moved before an expected Thursday visit by the observers in an apparent bid to cover up reported assaults.

“The sign of my village, Kfar Owaid, where a massacre happened last week, is now on the outskirts of Ihsam,” said Alaa, an activist who did not want his full name published for fear of retribution.

Human Rights Watch accused Syrian authorities of moving hundreds of detainees to military installations, which will be off-limits to the observers, and of issuing police identification cards to members of the armed forces. The New York-based rights group urged the monitoring mission to insist on access to all places of detention.

Syrian officials say monitors will have freedom of movement except for sensitive military sites. They say they are committed to the league’s peace plan and lay the blame for persistent bloodshed on what they describe as armed terrorists gangs, which they say are incited and supported from abroad.

State television said 755 detainees who had been involved in recent unrest and “did not have Syrian blood on their hands” were released Wednesday. Activists say thousands more remain behind bars.

Photo: A video uploaded on YouTube shows a Syrian speaking with Al Dabi (right) during a tour of Homs on Tuesday.