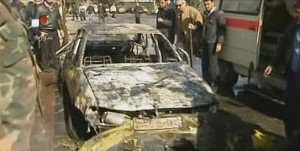 The attacks follow the arrival of an Arab League committee in the country to discuss the parameters of a pending mission to monitor the violence that has beset Syria in the wake of an uprising against President Bashar al-Assad that has killed thousands.

The bombers targeted the State Security Directorate and another security branch, according to media reports.

A number of military and civilian casualties were reported, the media reports said. Neither state-run TV nor the state-run news agency provided details about the possible number of dead or wounded.

The two attacks, according the investigations, were carried out by two suicide bombers with two booby-trapped cars, SANA reported.

CNN can not independently verify the reports. The Syrian government has refused access to international journalists.

Grisly images of body parts strewn across a street near at least one of the explosions were broadcast on state TV.

The bombs charred cars and destroyed buildings, according to video from the scene. It also showed men carrying the wounded in blankets.

The violence is that latest to hit Syria, which has been mired in a bloody months-long uprising that began with government crackdown on protesters calling for the end of the al-Assad’s regime.

The escalation in violence by al-Assad’s security forces against the opposition has earned worldwide condemnation, most notably from the Arab League but also from the United States, Turkey as well as countries in Europe.

The Arab League committee that arrived in Damascus on Thursday is coordinating logistics for a planned mission to monitor the opposition and Syrian forces.

Al-Assad agreed this week to allow Arab League observers into the country to monitor what opposition groups say is a brutal crackdown on demonstrators.

Al-Assad has insisted security forces are cracking down on armed gangs.

A source inside the Arab League told CNN that the team will meet with Syrian officials and prepare for the observers to travel to Syria by Monday or Tuesday.

A meeting is scheduled Monday in Cairo where the Arab League is headquartered, with members of the observer mission to discuss details of the operation, said Ibrahim Zafarani of the Arab Doctors Association. Zafarani said he and two Qatari doctors will be traveling to Syria.

“Our mission will be to assess the hospitals and their capabilities to take on patients, document the type of injuries, evaluate hospital staff and the medical assistance and supplies required for the hospitals, especially in the hotspot areas,” he said.

The suicide bombings in Damascus come amid a surge of violence this week that claimed hundreds of lives, the opposition Syrian National Council said.

At least 38 people were killed Thursday, according the the Local Coordination Committees of Syria, an opposition network that says it collects reports from eyewitnesses and protesters. CNN can not confirm the reports.

Of those killed, at least 25 were in the beleaguered western city of Homs.

Well over 5,000 people have died so far in al-Assad’s crackdown on protests that began in March, the United Nations said earlier this month. But scores of deaths have been reported by activists since that figure was released. One global activist grouip, Avaaz, said on Friday that more than 6,000 people have been killed in the government crackdown, now in its 10th month.

The government blames armed terrorist groups for the violence and says 2,000 of its soldiers and security forces have been killed in the crisis, SANA has said.

Much of the recent violence this week occurred in northwestern Syria near the Turkish border. The Turkish government in Ankara, which has been a staunch critic of the al-Assad regime, ratcheted up its rhetoric Thursday, saying the country is awash in “bloodshed” despite the Arab League’s peace efforts.

Mohmed Hamdo, a lieutenant colonel in the rebel Free Syrian Army, said bombing by the Syrian army is still ongoing in Jabal al Zawiya, in the northwest.