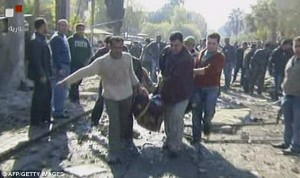 At least 40 people are reported dead and more 100 injured, after two explosions ripped through the Syrian capital Damascus.

The explosions came a day after Arab League officials arrived in Damascus, to pave the way for a monitoring team to enter the country.

Members of the delegation have visited the sites of the explosions.

Opposition campaigners claim the government staged the attacks to influence them.

Syrian security forces have launched a violent crackdown against anti-government protesters, the UN says more than 5000 people have been killed.

The aim of the Arab League mission is to check if Syria is implementing a peace plan to stop the bloodshed.

A Syrian Foreign Ministry spokesman said on Friday that Lebanon warned Damascus two days ago that al-Qaeda had infiltrated into the country.