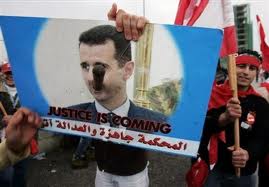 The protesters marched from Tripoli’s Qobba area toward other areas carrying posters against the Syrian regime, according to the report.

The government of Assad signed an Arab League peace initiative this week, admitting outside observers to his country even as his forces killed as many as 200 people in two of the deadliest days