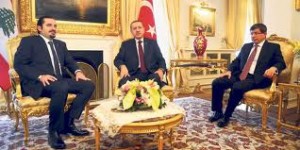 Lebanon’s Former Prime Minister Saad Hariri , who is in Turkey on an official visit said on Wednesday, following a meeting with Turkish PM Recep Tayyip Erdogan in Ankara, that Syria “should stop its killing machine,” according to local reports

Hariri and Erdogan held talks in the presence of Turkish Foreign Minister Ahmet Davutoglu, during which the attendees reviewed the latest regional developments, particularly in Syria.

Davutoglu who earlier in the day hosted a lunch for Hariri’s delegation said that Turkey “will make all possible efforts” to help the Arab League succeed in its mission to end the conflict in Syria and dispatch a monitoring team.

“We will support the Arab initiative and monitor its implementation, since we also took part in it .” Davutoglu stressed

However, Davutoglu sounded pessimistic about Syria’s intentions and said said:

“Unfortunately, even after Syria signed the [Arab] protocol, hundreds of Syrians were killed, and this is unacceptable.”

“Signing the protocol implies readiness to cooperate with the Arab League.” He stressed