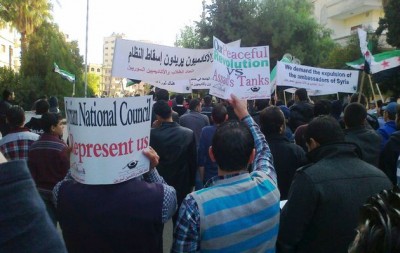 Hundreds of thousands of Syrians took to the streets on Friday to protest against President Bashar al-Assad, activists said, a day after Syria’s big power ally Russia sharpened its criticism of Damascus in a draft United Nations resolution.

Activists and residents said Syrian forces shot dead four people in a continuing crackdown that the United Nations says has killed 5,000 people in the last nine months and has provoked Western and Arab League sanctions to isolate Damascus.

Friday’s killings took place, activists said, after midday prayers in the eastern city of Deir al-Zour and in Homs, hotbed of opposition to four decades of repressive Assad family rule.

In Homs 200,000 people joined a protest march, the British-based Syrian Observatory for Human Rights said, and footage broadcast by Al Jazeera television showed mock gallows where five effigies were hanged, including one of Assad.

It was not possible to verify the number of protesters as Syria has barred most independent journalists, but if true it would be one the biggest turnouts for several weeks.

Russia on Thursday presented a new, beefed-up draft resolution on the violence to the U.N. Security Council, offering a chance for the 15-nation panel to overcome deadlock and deliver its first statement of purpose on Assad’s crackdown.

The council has been split between Western countries harshly critical of Syria on the one hand, and Russia, China and non-aligned countries on the other that have refused to pin the main blame on Assad for the violence.

Assad has denied that Syrian forces have been given orders to kill demonstrators, blaming armed groups for the violence. He said 1,100 soldiers and police have been killed since the uprising erupted in March, inspired by other unrest in the Arab world that has toppled three autocratic leaders this year.

An armed insurgency has begun to eclipse civilian protests, raising fears Syria could descend into civil war. On Thursday army deserters killed 27 soldiers and security personnel in the southern province of Deraa, the Observatory said.

It is the most serious challenge to the 11-year rule of Assad, 46, whose family is from the minority Alawite sect that has dominated majority Sunni Muslim Syria since 1970.

The United States and European Union have imposed sanctions and called on Assad to step down. Neighbouring Turkey has taken similar steps and even the Arab League has declared sanctions against Syria, although it has several times extended a deadline for Syria to approve a formula for ending the crisis.

In the latest sign of the heavy economic price Syria is paying for the bloodshed, Turkey said on Friday that Damascus would lose more than $100 million a year in transport revenues as Ankara bypasses the turbulent country by opening alternative export routes to the Middle East and Gulf.

The Turkish Economy Ministry said it had finalised talks to start exporting goods to Egypt via sea in January and from there overland to Gulf countries to avoid Syria.

“ARAB LEAGUE IS KILLING US”

A source at Arab League headquarters in Cairo did not give a reason for the cancellation. A lower-level meeting of its ministerial committee on Syria will go ahead in Qatar on Saturday, the source said. The committee includes the foreign ministers of Egypt, Sudan, Oman, Qatar and Algeria.

Friday’s protests were held under the slogan of “The Arab League is Killing us”, reflecting demonstrators’ frustration at what they see as the organisation’s ponderous response.

At the U.N. Security Council in October, Russia and China vetoed a West European draft resolution that threatened sanctions. Russia has circulated its own draft twice but Western nations said they had made unacceptable attempts to assign blame equally to government and opposition for the violence.

The draft floated unexpectedly by Russia on Thursday expands and toughens Moscow’s previous text, adding a new reference to “disproportionate use of force by Syrian authorities”.

Obtained by Reuters, the draft also “urges the Syrian government to put an end to suppression of those exercising their rights to freedom of expression, peaceful assembly and association”.

Reports by Human Rights Watch and a U.N.-backed independent investigation have assessed that Syrian government forces were given “shoot to kill” orders when confronting demonstrators.

Russia’s U.N. Ambassador, Vitaly Churkin, told reporters that the latest draft resolution “considerably strengthens all aspects of the previous text” and that “clearly the Syrian authorities are singled out in a number of instances”.

He said Russia did not believe both sides in Syria were equally responsible for violence, but acknowledged the text called on all parties to halt violence and contained no threat of sanctions, which he said Moscow continued to oppose.

U.S. Secretary of State Hillary Clinton said she could not support some parts of the draft but “hopefully we can work with the Russians, who for the first time at least are recognising that this is a matter that needs to go to the Security Council”.

In London, British Foreign Office Minister Alistair Burt said Russia might hold the key to tightening sanctions on Syria, but Britain would also look at ways of imposing new measures on Damascus through the European Union.

“We will continue to look for new ways in energy, in transport, as well as financial restrictions, to put pressure on the Syrian regime,” Burt told Reuters in a telephone interview.