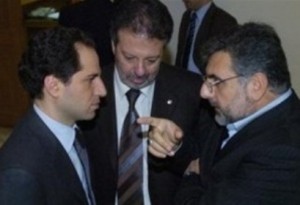 Hezbollah MP Nawwaf Moussawi apologized on Thursday to Speaker Nabih Berri and the MPs over the language he used during his verbal clash with Phalange MP Sami Gemayel during Wednesday’s parliamentary session.

In a statement issued by Hezbollah’s press office, Moussawi said: “Out of my respect to the party’s values and ethics, I apologize to Speaker Nabih Berri and fellow MPs over the offensive language I used in my response yesterday.”

This comes after a verbal clash that erupted inside the parliament on Wednesday in Beirut between Gemayel and Moussawi when the issue of the Shiite party’s attempt to expand its telecommunications network was discussed during a Question and Answer session .

“Who are you calling agents? The history [of the Phalange ] should be an honor [to you]… You are disrespectful,” Gemayel told the Hezbollah MP

But Speaker Nabih Berri reportedly intervened , warning Moussawi that he “shouldn’t defend the resistance in this way.”

Responding to Moussawi’s apology later Thursday, Gemayel thanked Berri for his mediation efforts and hoped things will be back to normal and MPs would be able to express their viewpoints without reaching the degrading level of speech.

At a press conference he held in parliament, the Metn MP hoped that the apology would help Hezbollah understand that it can neither abolish nor threaten any party in Lebanon.

“We dedicate this apology to all the Lebanese and the free people in Lebanon because the insult was not directed at us but the Lebanese people whom we represent,” he added.

“What happened is an insult to the parliament and the lawmakers and should be solved inside the legislature and in front of them through a public apology by Moussawi,” Gemayel added.