Chirac found guilty of corruption by a French court 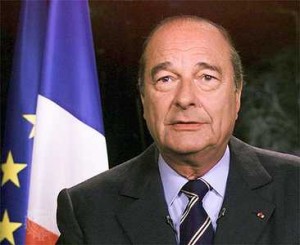 A French court found former President Jacques Chirac guilty of embezzling public funds to illegally finance the conservative party he long led, in a historic verdict Thursday with repercussions for his legacy and France’s political elite.

Chirac, a savvy world diplomat and icon of France’s ruling establishment for decades, will not go behind bars but was handed a two-year suspended sentence that goes on his criminal record. Anti-corruption crusaders, long frustrated by dirty dealings in the French political machine, rejoiced at the conviction.

He’s the first former French head of state to face prosecution since the World War II era. But the 79-year-old former leader did not take part in the trial, after doctors determined that he suffers severe memory lapses.

The court said Thursday it had found Chirac guilty in two related cases involving fake jobs created at the RPR party, which he led during his 1977-1995 tenure as Paris mayor. He was convicted of embezzling public funds, abuse of trust, and illegal conflict of interest.

Chirac repeatedly denied wrongdoing. It took years to get him to trial because he enjoyed immunity from prosecution during his 1995-2007 presidential tenure, during which he led France into the shared euro currency and became the global champion of opposition to the U.S.-led invasion of Iraq.

The court said it took into account his age, health and status as a former head of state when determining the light sentence.

Unusually, the prosecutor had requested that Chirac and the nine other defendants in the complex two-part case be acquitted, saying not enough evidence proved intentional corruption. The court disagreed, saying his guilt results “from long-standing and reiterated practices” of illegal party financing.

Chirac’s adopted daughter fought back tears as she lamented the ruling.

“The justice system has been very severe, but this is a fair and independent justice system. For the family, it’s a great pain we have to accept,” said Chirac’s adopted daughter Anh Dao Traxel, her voice cracking with emotion as she spoke to reporters outside the courtroom.

“I think this decision is too, too severe for him and our family has more than ever to show solidarity and be supportive, for his health for the rest of his life,” said Traxel, a former Vietnamese boat person. Chirac and his wife formally adopted Traxel after she came to Paris in 1979.

Chirac lawyer Georges Kiejman called the ruling disappointing and said he expected a decision later Thursday on whether Chirac would appeal.

“We have to take a step back and read this ruling, we have to speak of course with the main person involved (Chirac), and we will know tonight if he accepts this decision,” Kiejman said. “What I hope is that this ruling doesn’t change in any way the deep affection the French feel legitimately for Jacques Chirac.”

The ruling is certain to bruise Chirac’s public image. Leaving office in 2007 did wonders for his popularity: while polls showed that he was unpopular in his final years as president, those numbers soared afterward — and even today, the avuncular former leader, who now focuses on charitable work, has been one of France’s most popular public figures.

Critics had pushed for years to see Chirac answer charges of illegal party financing, frustrated by his presidential immunity and a sense that the political machine would never let the sensitive trial come to pass.

Jerome Karsenti, a lawyer for the anti-corruption group Anticor, which had argued against Chirac as a civil party to the case, said the reverberations could be widespread for France’s political elites.

“This is a strong message from the court — a message to all politicians of responsibility. It’s also proof of a mature and transparent democracy that is today able to make a distinction and try a former president,” Karsenti said.

“I see it as a historic and very important decision for the future of French democracy,” he said.

The latest baring of France’s underworld of back-room cronyism, corruption and political wrongdoing could loom large in voters minds as the French cast ballots in presidential and legislative elections next year.

The party that succeeded the RPR, President Nicolas Sarkozy’s UMP party, and the opposition Socialist Party have seen their share of scandal recently. Two longtime Sarkozy allies have been targeted since September in a case of suspected kickbacks in a 1990s French defense deal with Pakistan. Sarkozy served as budget minister at the time, but his office and allies insist he was not involved.

In Thursday’s ruling, the court found that 19 totally or partially fake jobs were created to benefit Chirac. “The case and the debates established that Jacques Chirac was the initiator and principal author of crimes of abuse of trust, embezzling and illegal conflict of interest,” the ruling said.

A career politician, Chirac was a debonair master of the workings of public office. He modeled himself after longtime French leader Charles de Gaulle and was nicknamed “Le Bulldozer” early in his career for his determination and ambition.

France’s last leader with memories of World War II, Chirac was the first to acknowledge the nation’s responsibility for the deportation of Jews during the Holocaust. But he struggled to achieve reforms to the regulated economy and failed to defuse tensions between police and minority youth that exploded into riots in 2005.