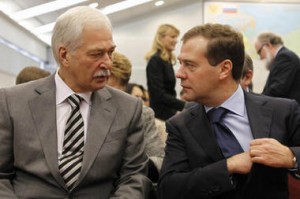 The decision appeared aimed at cooling public anger over an election opponents say was rigged in the ruling party’s favor. Protests against the result have undermined Putin’s authority ahead of a March vote in which he plans to return to the presidency.

“I decided today to reject my mandate as a deputy,” Gryzlov said in remarks posted on the party’s website, adding that it would “not be right to hold the post of chairman of the chamber for more than two consecutive terms”.

As Duma speaker since 2003 and chairman of United Russia’s Supreme Council, Gryzlov is a powerful symbol of a political system dominated by Putin and the party for more than a decade.

Voters expressed their frustration with that dominance by sharply reducing United Russia’s parliamentary majority in the Dec. 4 vote. It will hold 238 seats when the 450-member Duma convenes on Dec. 21, down from the 315 it won in 2007 elections.

Claims of electoral violations spread via the Internet and tens of thousands of people protested in dozens of cities on Saturday, calling for a new election and chanting for a “Russia without Putin”.

The decline of support for his party and the biggest opposition protests of his rule have put him under pressure to address the concerns of Russians who want a stronger voice in politics and fear his return could hamper economic progress.

Gryzlov’s decision will be seen as a victory for the protesters, but may not appease them. Some observers had expected Putin to ensure he stepped aside in favour of a new speaker.

The decision fit into an apparent effort by Putin to set some distance between himself and the party, which has always been less popular than he is. Putin is chairman of United Russia but not a member.

Gryzlov, who turns 61 on Thursday, was entitled to one of United Russia’s seats in the Duma because of his position on the party’s candidate lists. Any candidate allotted a seat can refuse to take it and cede it to the next person in line.

Gryzlov, a former interior minister, once encapsulated the party’s legislative style for its critics by saying the Duma was “no place for discussions”.