Iran Shows Video It Says Is of U.S. Drone 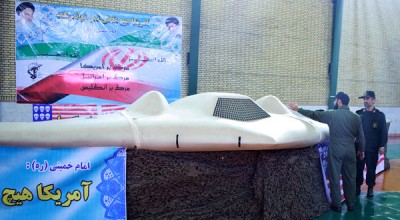 Iran paraded what its military described as a captured C.I.A. stealth drone on national television on Thursday and lodged an official diplomatic protest, portraying the visual images as an intelligence and propaganda windfall in its conflict with the West over its nuclear program.

American officials viewing the video declined to confirm or deny that the aircraft shown was the one that they have said was lost several days ago by controllers in neighboring Afghanistan.

The 2.5-minute video clip of the remote-controlled surveillance aircraft was presented by Iran as the first visual evidence that it had had possession of the drone since Sunday, when Iran asserted that its military downed the aircraft 140 miles inside Iranian territory. American officials have said the drone was lost because of a malfunction.

The aircraft shown on Iranian television appeared to be in good condition, which would seem to be inconsistent with an uncontrolled landing, although a close inspection of the images appeared to show a fracture on part of the wing that had been taped.

The aircraft was displayed on a platform clearly constructed for propaganda purposes, with photographs of ayatollahs who led Iran’s revolution behind it and a desecrated version of the American flag. But the display did not show the undercarriage of the aircraft, which could have revealed possible damage.

At the Pentagon, senior officials would say only that the images from Iran were being analyzed by specialists both in the military and in other parts of the government, presumably intelligence agencies. A C.I.A. spokesman declined to comment.

American officials did not assert that the aircraft was a fake, and independent experts offered mixed assessments.

John Pike, director of GlobalSecurity.org, a consulting firm, said he would have expected far more damage if the aircraft had hit the ground in an uncontrolled crash. But Richard F. Healing, an aviation consultant, said many drones were “basically gliders,” with large wings relative to their weight. If it ran out of fuel, he said, a drone “might come down gently” and be damaged only lightly if it did not hit something.

Iran also said it had formally protested what it said was the drone’s violation of Iranian airspace. Because Iran and the United States have no direct diplomatic relations, Iran summoned the ambassador from Switzerland, which manages American interests in Iran.

American officials have identified the missing drone as an RQ-170 Sentinel, an unarmed bat-winged aircraft used by the C.I.A. It can linger undetected for hours at 50,000 feet, far higher than many aircraft, with cameras and other sensor equipment to monitor activity on the ground. An RQ-170 was used to gather intelligence for the raid that killed Osama bin Laden in Pakistan in May.

The loss of an RQ-170 in Iran is a potentially significant intelligence blow for the United States, which has been stepping up efforts to monitor suspected nuclear sites in Iran.

The United Nations issued a report on Nov. 8 that said Iran might be actively working on a nuclear weapon and a missile delivery system. Iran insists its nuclear program is peaceful and has denounced the report as a fabricated pretext for new Western economic sanctions and possible military intervention.

Iran’s leaders point to the drone as evidence of hostile American intentions.

The video was narrated by a voice that said Iran’s Islamic Revolutionary Guards Corps and army had collaborated in a “sophisticated electronic attack” to bring down the plane. The unidentified narrator gave the drone’s dimensions as about 85 feet wide, 15 feet long and nearly 6 feet high. The narrator also said it had “electronic surveillance systems and various radars.”

In an apparent attempt to explain the aircraft’s undamaged appearance, a Revolutionary Guards commander, identified as Brig. Gen. Amir Ali Hajizadeh, said in the video that it “was brought down by Iran’s military systems with the minimum damage possible.”

American military experts have cast doubt on Iran’s assertions partly because of the drone’s ability to avoid radar detection. “It would be almost impossible for Iran to shoot down an RQ-170 because it is stealthy, therefore, the Iranian air defenses can’t see it,” Loren Thompson, an analyst at the Lexington Institute in Arlington, Va., told the newspaper The Military Times. “Partly for the same reason, it is exceedingly unlikely that they used a cyberattack to bring down the aircraft.”

Nonetheless, it remains unclear how American controllers lost contact with the missing drone and how it appeared to have ended up, seemingly intact, on the ground in Iran. American officials have not specified where it was lost. Iran’s state-run press has said that it landed near the town of Kashmar, about 140 miles from the Afghan border.

Iran’s semiofficial Mehr News agency reported on Thursday that Russian and Chinese officials had asked for permission to inspect the captured drone.

RQ-170 flights are among the most secret of the C.I.A.’s intelligence-gathering efforts in Iran, according to American experts and officials who have been briefed about them.