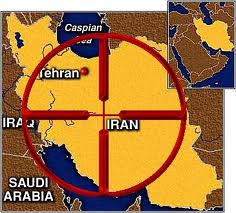 AMERICA yesterday branded Iran a “pariah state” and threatened it with a military strike.

A senior US official warned if no diplomatic solution is reached over Tehran’s nuclear programme it could mean war.

The State Department’s arms adviser Robert Einhorn said: “Iran is violating international obligations and norms. It is becoming a pariah state. The situation in Iran has become more and more worrisome.

“The timeline for its nuclear programme is beginning to get shorter, so it is important we take these strong steps on an urgent basis. If we do not, pressures will grow for much stronger actions.

“The US favours a diplomatic solution but, if we cannot achieve it soon, inevitably interests will grow in a different kind of solution.”

Plans for a US strike are currently being drawn up. Iran president Mahmoud Ahmadinejad claims its nuclear programme is for peaceful purposes but Tehran has warned it would respond to any attack on it by striking at Israel and US interests in the Gulf.

The West last week tightened sanctions against Iran, with the EU expanding an Iranian blacklist and the US Senate clamping down on Iran’s oil income.

It followed demonstrators over-running British embassy buildings in Tehran last week. Iranian diplomatic staff were then thrown out of the UK on Friday.

On Sunday Iran claimed to have shot down a US spy drone in its airspace – although the US counter-claimed it was in Afghanistan.

Yesterday Iran also vowed it would be opposed to the presence of foreign troops in neighbouring Afghanistan after 2014.