Beirut, Lebanon – Syria said Sunday it is still negotiating with the Arab League over the bloc’s request to send observers into the country, as tightening sanctions by Arab and other nations fail to halt the eight-month crackdown on anti-government protesters.

A Foreign Ministry spokesman suggested some headway had been made, but there was no official announcement on whether Syria would sign the agreement.

New violence killed at least nine people on Sunday, including a female university professor and a father and his three children in central Syria, opposition activists said. The Local Coordination Committees activist network put the death toll from violence Sunday at 22, but the number could not be immediately confirmed by other activist groups.

Activists also said a U.S.-born Syrian blogger was arrested at the Syrian-Jordanian border while on her way to attend a workshop for advocates of press freedoms in the Arab world.

A statement issued by the Syrian Center for Media and Freedom of Expression said Razan Ghazzawi was arrested by police and immigration officials at the border while on her way to Amman to attend the conference as a representative of the center. 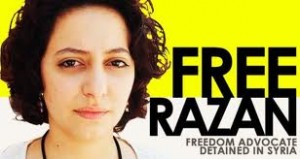 Ghazzawi is a human rights advocate and had been documenting violations and arrests in Syria since the start of the uprising against President Bashar Assad in March. She is one of the few Syrian activists who blogged under her real name.

Arab leaders have given Syria a new deadline of Sunday to respond to the League’s peace plan, which calls for the admission of observers to ensure compliance with a government cease-fire. They also held out the threat of pushing for U.N. involvement if Damascus balks.

Syria’s failure to meet a Nov. 25 deadline to allow in observers drew Arab League sanctions, including a ban on dealings with the country’s central bank. Together with sanctions from the United States, the European Union and Turkey, the Arab League’s penalties are expected to deal significant damage to Syria’s economy and may undercut the regime’s authority.

The revolt against President Bashar Assad’s rule began with peaceful protests in mid-March, triggering a brutal crackdown. The unrest has steadily become bloodier as army defectors join the revolt and some civilians take up arms, prompting the United Nations’ human rights chief to refer to it last week as a civil war and urge the international community to protect Syrian civilians.

The U.N. estimates more than 4,000 people have been killed.

Some areas of central Syria, particularly Homs where most of Sunday’s deaths occurred, have already been witnessing tit-for-tat sectarian attacks, mostly between majority Sunnis and Alawites from Assad’s minority religious sect.

The top U.S. diplomat for the Middle East said Assad is responsible for deepening the sectarian division in Syria.

Feltman said Washington has been in touch with Syrian Christians to prod them “not to stand on the side of the attacker,” but declined to elaborate. Many among Syria’s Christian and other minorities have sided with Assad’s regime, fearing they would be targeted if the Sunni majority takes over.

Speaking in Amman, Jordan, Feltman also told reporters the U.S. has “evidence” that Iran and the militant Lebanese Hezbollah have agents in Syria to bolster Assad’s waning regime — a charge both have repeatedly denied.

Faced with Sunday’s new Arab League deadline, Syria signaled it still might be willing to comply with the League’s plan, saying its objections were simply a matter of details.

“Messages are being exchanged between Syria and the Arab League to reach a certain vision that would facilitate the mission of observers in Syria while preserving Syrian interests and sovereignty,” Foreign Ministry spokesman Jihad Makdissi told reporters in Damascus.

Asked later Sunday whether any decision had been made, he said: “If there are good intentions, the road is open toward signing an agreement.” A more detailed response would be made Monday, he said.

Syria, which has already been suspended from the 22-member League, may be playing for time while its crackdown continues.

Qatar’s prime minister said Saturday during a meeting of Arab foreign ministers in the Gulf country’s capital, Doha, that he expected Syrian envoys to sign an agreement on Sunday.

Sheik Hamad Bin Jassem Bin Jabr Al Thani said failure to reach an agreement may lead to U.N. involvement in the Syrian crisis, although he did not spell out what that meant.

Arab ministers have continued to meet to work out enforcement of the existing sanctions package.

Some sanctions — the central bank ban, a halt to Arab government funding of projects in Syria and a freeze of Syrian government assets — went into effect immediately.

Saturday’s meeting approved a list of 19 Syrian officials subject to a travel ban. Among them are Assad’s younger brother Maher, who is believed to be in command of much of the crackdown, as well as Cabinet ministers, intelligence chiefs and security officers. The list does not include the president himself.

The Syrian government said Sunday it was suspending a 2004 free-trade agreement with Turkey in response to the penalties imposed by its former close ally.

As a reciprocal measure, it added, all Turkish imports would be subject to customs fees.

Turkey’s Economy Minister Zafer Caglayan criticized the move on Sunday saying the Syrian government was “punishing its own people, its own industrialists, exporters and entrepreneurs.”

“Despite the Syrian government’s decision Turkey will continue to support and side with the people of Syria,” Caglayan said in Turkey.

Turkey, a key NATO member and until recently a close partner of Syria, imposed tough new sanctions against Damascus this week that included the suspension of all ties to the Syrian Central Bank and freezing any Syrian government assets in Turkey. Turkey and Syria did $2.4 billion in trade last year, according to the Turkish Embassy in Damascus.