by Ghassan Karam
681
by Ghassan Karam And so Lebanon dodges another bullet. What was billed, by all sides, as being potentially an explosive event ended up being a whimper just like the Elliot had predicted in “The Hollow Men” :
Share: 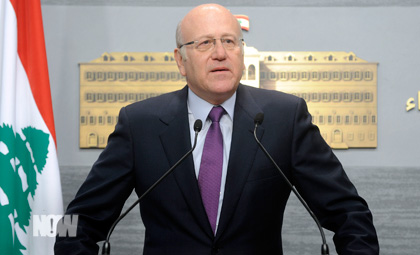 And so Lebanon dodges another bullet. What was billed, by all sides, as being potentially an explosive event ended up being a whimper just like the Elliot had predicted in “The Hollow Men” :

Not with a bang but a whimper.

In the last round things are different. No matter what kind of a spin anyone wishes to apply to the outcome Mr. Mikati has scored a touchdown in the last seconds of the fourth quarter. As a result the big losers are both Hezbollah who promised that the STL will never be financed and then obviously the clAoun who never seems to know what he wants. It is as if he is always waiting for orders from Damascus.

But this apparent victory is hollow. It does not mean much.  Lebanon is still waiting for the real independent Najib Mikati to stand up and make a statement that is based on nothing else but the Lebanese national interest. He has not done that yet and it is highly unlikely that he would. The FPM on the other hand is busy bending itself into a pretzel form to say that what they have always cared most about is the integrity of Lebanon more than the simple singular issue of STL finance. The only response to that is bunk!!! This fiasco has demonstrated again the lack of professionalism, the amateurism in decision making and the total incompetence of those in charge of the FPM. But don’t blame them blame those that have voted for them without holding them responsible for anything and blame those that will vote for them again.

But the biggest looser by far is Hezbollah. A party that has threatened and cajoled a people on this very same issue that they had to eventually agree to. It will be next to impossible to explain rationally this flip flop of Hezbollah.

But Lebanon has not won except a small moral victory. HA still acts as a state within a state. Note the recent problem with electric generation at AlZahrani power generation plant. The official Lebanese authorities have not been allowed to enter that area because it is only a “ghost” part of Lebanon an incorporeal region. The South is ruled by HA and neither the Lebanese Army, nor the Lebanese PM nor the Lebanese President have much to say about that.

Unfortunately Lebanon’s problems are not limited to those mentions, as seminal as they might be. The opposition; March 14; is not in a much more enviable shape. Sa’ad Hariri has demonstrated amply enough that he was not born to lead. He is neither charismatic, nor well read he is neither creative nor principled. He simply has no vision; if he does he has not articulated it. The others in his camp are at least equally as disadvantaged and even more so. Samir Geagea carries so much baggage from the civil war that he must never be given even the chance to lead while the Gemayels will never be able to escape from their self made image of religious and political dinosaurs. Mr. Jumblatt appears to be a liability to both sides.

Lebanon’s salvation is in modernity, democracy and a clearly defined bill of rights, i.e. a truly secular society. But how can we have a secular society when the Patriarch, the head of the largest Church in Lebanon behaves on a daily basis as a political chieftain, a non elected one for that matter. What hubris and what chutzpah. Why does he think that he is qualified and/or entitled to act as a political feudal lord when he is at best a priest, a man of the cloth who is supposed to offer some guidance to his flock on strictly spiritual basis? The Maronite patriarch and all the other Christian church leaders must, in the name of Christianity, renounce all semblances of political power and simply encourage their flock to develop an identity that transcends religion. If they fail to do that then they fail the basics of the Judeo Christian ethics, the egalitarianism of St Francis of Assisi.

And in all fairness the same is true of the Moslem Sunni Mufti. He must emphasis to his followers that to be a good citizen of a state does not diminish one’s ability to be a good observant Moslem. Religion is a personal matter and must not be brought into the public square. That is purely for the secular. And that is another fatal flaw in Hezbollah who have stated clearly their belief in Wilayat Al Faqih. It simply states that the head of the church is to dictate and rule. No one else is important. That is autocratic and dictatorial. That is the interpretation of Qom and not Najjaf.

Yet I will be willing to put at risk everything of value to me in order to protect the right of Hezbollah to the freedom of self expression and belief but not for the right to abuse this freedom by taking a whole country hostage. They can rationalize it any way that they want but no one has a monopoly on resistance and no one has a right to establish a state within a state through illegitimate force and foreign interfernece.

A democratic Lebanon shall rise from the ashes and the tyranny of hooliganism and vigilantes shall perish. Either the outright fall of the Syrian regime or the introduction of meaningful democratic changes ogre well for Lebanon. They would only mean the diminution of the HA power. But let us remember that that is not enough in itself for the establishment of a potentially vibrant democracy. We have to declaw the other clerics also, the Patriarch and the Mufti.