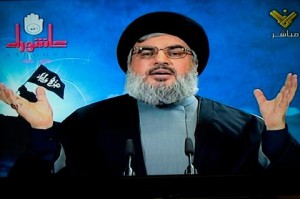 Hezbollah Secretary General Sayyed Hasan Nasrallah said Thursday during a TV appearance via video link that he is still opposed to the Special Tribunal for Lebanon and funding it but will not try to create a crisis over it for the sake of the country .

“From the very beginning of the cabinet formation, we did not put conditions on Mikati. Second, we agreed to collaborate in order to resolve the funding issue. Third, we believed that Mikati embarrassed himself when he through the media repeatedly voiced commitment to the STL without consulting with ministers .

” Also, when Mikati announced that he will resign if the STL funding is not secured, we entered a government crisis, especially after MP Michel Aoun’s Change and Reform bloc ministers took a position on the cabinet’s performance and boycotted one of the sessions… this had nothing to do with [Mikati’s] view on the funding.”

“Aoun’s ministers were rightful to boycott the cabinet session [last week] because they have demands regarding social needs and projects [that are at a stalemate].”

“As for [Hezbollah], the STL is unconstitutional, Israeli and US-made, oppressive and it will stay like that. Second, we are still against it and against its funding. Third, had the cabinet or parliament convened on the STL funding, [our representatives] would have voted against financing it.

“We reaffirmed our commitment to maintain this government and fix the gaps. [Mikati] took a decision to finance the tribunal out of the Higher Relief Commission’s budget. Whether he used the funds out of donations or the HRC’s budget, I did not get into the details. The days will show how this process happened.”

” I still do not know if the way the financing happened was legal or not.”

“We are with maintaining the current government, reject all means of funding or cooperation with the STL, but we will make the country’s interests a priority.

” It is my duty to thank the political parties who supported [our position] of rejecting the STL’s funding. I also thank all parliamentary blocs and ministers who voiced solidarity with us. Had the cabinet put the funding issue up for a vote, it would have definitely not passed.”

Commenting on the mediation effort prior to the collapse of the government of former PM Saad Hariri he said:

“The funny thing is that the US, France, Turkey, Qatar and even Syria, wanted to make a deal in order to abolish the STL, but later, [after we rejected the deal] they started warning us that we should fund the tribunal. This means that their move is politicized.”

He started the speech by attacking the future Movement and accused it of inciting sectarianism.

According to reliable sources the decision on funding the tribunal was made in Syria. The night before the funds were transferred Hezbollah and Amal representatives were in Damascus and were told point blank to allow Mikati to fund STL .