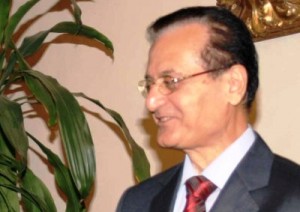 “Lebanon will not implement any sanctions by the Arab League against Syria, because we didn’t agree to them and they are bad for Lebanon” Mansur, who is a member of the Amal Movement which is backed by the Iranian and Syrian backed Shiite militant group Hezbollah, told New TV

He added: “We cannot back sanctions against Syria due to the historical, security and economic relations with Syria,”

Arab foreign ministers on Sunday agreed on sweeping sanctions against Damascus to punish President Bashar al-Assad’s regime for failing to halt a deadly crackdown on protests.

“If the sanctions are adopted in Cairo’s meeting today by Arab foreign ministers, it will be very unfortunate because the damage will be on all sides,’ a source close to Mansour told dpa on Sunday.

The US has urged Lebanese authorities to protect their financial sector against potential Syrian efforts to sidestep sanctions, sparking fears Beirut could be affected by possible future measures against the Assad regime.

The Lebanese leaders are divided over Syria crisis. The country’s pro-Western opposition, led by former premier Saad Hariri, has thrown its weight behind anti-Assad protesters in Syria, while the Hezbollah led alliance which dominates the Lebanese government, has said it will continue to stand by Assad against an “international conspiracy” aimed at ousting him from power.

According to the UN the Syrian regime’s crackdown on anti-regime protests has left at least 3,500 people dead since mid-March.