Arab FMs drew up list of sanctions against Syria 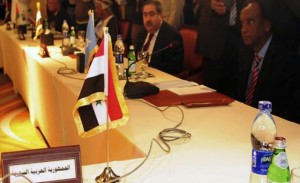 Arab finance ministers gathered in Cairo on Saturday drew up a list of sanctions against Syria that they will present to foreign ministers for adoption as fresh violence killed 24 civilians and members of the security forces.

The recommendation of the Arab economic and social council – which includes a ban on Syrian officials visiting any Arab country and the freezing of government assets – comes after President Bashar al-Assad’s regime defied an ultimatum to allow in observers amid a lethal crackdown on protest.

The list of punitive measures also included the suspension of flights and a halt to any transactions with the Syrian government and its central bank.

Arab states are also called to freeze any investments for projects in Syria.

The Arab League had set a Friday deadline for Damascus to agree to the details of the observers’ mission, part of a reform deal Syria had previously said it accepted.

If adopted, the sanctions are likely to have a crippling effect on Syria which relies on its Arab neighbors for half of its exports and a quarter of its imports.

On the ground, at least 24 civilians and members of the security forces were killed in attacks in Syria on Saturday.

Deserters killed eight soldiers and members of the security forces and wounded 40 more in an attack in Idlib in northwest Syria, the Syrian Observatory for Human Rights said.

“A group of deserters attacked a squad of soldiers and security agents in a convoy of seven vehicles, including three all-terrain vehicles, on the road from Ghadka to Maaret Numan,” the Britain-based watchdog said.

“Eight were killed and at least 40 more were wounded. The deserters were able to withdraw without suffering any casualties,” it added.

The rebel Free Syrian Army said in a statement it was behind the attack.

Elsewhere, 16 civilians, including two children aged nine and 10, were shot dead by security forces – 15 in Homs and Qussayr in central Syria and another in Deir Ezzor in the east, the Observatory said.

It added that the bodies of three men arrested several days ago in Homs and Idlib were returned to their families.