ElBaradei is ready to be Egypt’s next PM 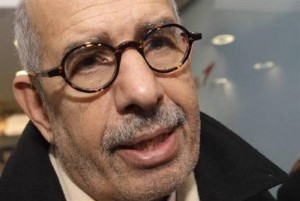 Mohamed ElBaradei said he is “ready to give up running for president” of Egypt next year. Such a decision is due to the fact that he is ready to take office as the Prime Minister of Egypt’s national salvation government right now.

Former IAEA president and winner of the Nobel prize for peace, ElBaradei was received today by the military junta currently holding power. He is greatly supported by the demonstrators in Tahrir Square, who turned down the previous appointment of Kamal Ganzouri as PM. In an improvised press conference held before the seat of the Council of Ministers, the representatives of the April 6 Youth Movement asked that ElBaradei be appointed PM of a new government. .