Cairo street battles rage on through the night 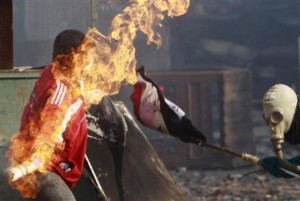 Egyptian riot police fired barrages of tear gas at hardcore protesters demanding Egypt’s army relinquish power in a sixth night of violence which has led the interior minister, according to one report, to propose postponing elections due on November 28.

Scores of young men, coughing and gasping for air stumbled into dark side streets off Cairo’s Tahrir Square to escape the acrid smoke during the to-and-fro battle with police.

But undeterred, tens of thousands still thronged the square peacefully late into the night on Wednesday to protest at the deaths of more than 30 people in the violence and reject the army’s offer of a referendum on its rule.

In light of the violence, Interior Minister Mansour el-Essawy presented a report to the military council proposing a postponement of the parliamentary election planned for November 28, Al Jazeera television said on Thursday, quoting unnamed sources. It was not immediately possible to verify the report.

The election, due to begin on Monday, has been billed as Egypt’s first free vote in decades.

The army and the Muslim Brotherhood, which expects to do well in the election, says it must go ahead but many protesters are unwilling to trust the army to oversee a clean vote and hand real control of the country to the winner.

The generals’ popularity has waned in the nine months since they nudged President Hosni Mubarak from office and swore to steer the country toward civilian democracy, as suspicion grew that they were manoeuvring to stay in power beyond elections.

The head of the military council, Field Marshal Mohamed Hussein Tantawi, has pledged to bring forward a presidential vote and offered a new interim government but the demonstrators are unconvinced.

“The military council must leave and hand power to civilians. They don’t want to leave so that their corruption isn’t exposed,” said 23-year-old student Ahmed Essam.

He said he joined the protests when he saw riot police raining blows on peaceful demonstrators on Saturday. “Everything is like in Mubarak’s time,” he said.

Gunfire rattled near the Interior Ministry, a symbol of state authority and target of the protesters, on Wednesday night. Several gave accounts of people shot dead but these could not immediately be verified.

At a makeshift clinic near Tahrir, doctor Tareq Salem said four people had died there on Wednesday, two from bullet wounds and two from asphyxiation.

He said three volunteer doctors have been killed since the violence began.

“They were fresh graduates,” he said, splashing his face with saline fluid to counter the effects of the latest barrage of gas. One died of suffocation, the other two of bullet wounds sustained while assessing injuries outside, he said.

Essawy told state television earlier that only tear gas was being fired by the security forces but there were unidentified people shooting from rooftops near Tahrir.

Thousands turned out in the second city of Alexandria and in Port Said. One died and two were injured in Ismailia, a city on the Suez Canal, security sources said.

Protesters accused the army of using hired thugs to buildings and paint a political protest as mindless vandalism.

TV stations showed a man being beaten in Tahrir Square after he was accused of working for state security under cover and shooting at protesters.

Ambulances, sirens wailing, ferried casualties away while smoke billowed over the area from fires lit by youths.

Gunfire rang out repeatedly, fuel-filled bottles erupted in flames and riot police filled the street in front of their main position with round after round of tear gas, driving protesters, coughing, into side streets. Every so often, the demonstrators regrouped and would again edge toward the ministry.

What started as a sit-in on Saturday night has turned into a mass demonstration reminiscent of the 18-day uprising against Mubarak as Egyptians appalled at the mistreatment of protesters joined them in solidarity.

Youthful demonstrators took Tantawi’s offer of a referendum on whether military rule should end earlier as a ploy to undermine their cause by appealing to Egyptians who fear further upheaval.

Many worry the unrest will prolong economic stagnation and delay any improvement in a morose business climate that has deepened the poverty of millions.

Those that did join the protest said it is always better to take a stand.

“I want to have a better life and feel safe. Since the military council took power, it has been worse,” said protester Abdel Salam Roshdy.

Nader el Sayed, a former goal keeper of Egypt’s national football team, led protesters in Tahrir chanting: “The blood of the martyrs won’t be for free.”

Protesters unfurled a huge sign denouncing Tantawi, who was Mubarak’s defense minister for two decades, and his deputy Sami Enan, along with the rest of the ruling SCAF military council.

“Down, down with military rule. We the people are the red line. The people want to bring down the field marshal, Sami Enan and the military council,” it read.

The overall death toll has reached 39 by a Reuters count. One man was killed in Alexandria and another died in what the state news agency MENA said was an attack on a police station in the northern town of Marsa Matrouh.

The Health Ministry said 32 people had been killed and 2,000 wounded in disturbances across the country of 80 million.

Egypt’s currency dipped to its lowest level in almost seven years on Wednesday and the yield on an Egyptian dollar bond soared to its highest since March, suggesting that investors are unconvinced that stability will return soon.

Photo: A protester throws a Molotov cocktail (petrol bomb) at riot police during clashes along a road which leads to the Interior Ministry, near Tahrir Square in Cairo November 23, 2011. REUTERS/Amr Abdallah Dalsh