by yalibnan
2443
Yemeni President Ali Abdullah Saleh, who agreed Wednesday to step down after a ferocious uprising against him, was perhaps the slipperiest leader in the Middle East.
Share: 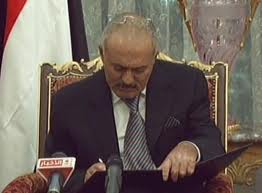 Yemeni President Ali Abdullah Saleh, who agreed Wednesday to step down after a ferocious uprising against him, was perhaps the slipperiest leader in the Middle East.

When the top commander of American forces in the Middle East dropped by in 2010 to discuss Yemen’s U.S.-backed campaign against al-Qaida, Saleh happily promised to keep lying to his people and say that Yemeni aircraft — not American — were carrying out controversial strikes against Islamic militants hiding in the mountains.

Just over a year later, as millions of Yemenis protested daily in the streets for his ouster, Saleh promised his ally the United States he would sign a deal for his resignation. Instead, he sent a mob of supporters to besiege the U.S. and other ambassadors in an embassy, while at a ceremony at his palace he balked at signing the deal on the excuse that the top opposition leader was not in the room to sign as well.

In fact, Saleh found excuses to back out of signing at least two more times over the course of the year. He finally signed off on the deal on Wednesday in the Saudi capital Riyadh. But not even then was the feisty Saleh prepared to go without a few digs at his critics, many of them sitting with him in a hall at the opulent palace of Saudi king Abdullah.

“It will take years for us to rebuild what was destroyed during the crisis,” he told a signing ceremony. In a dark business suit and a silver tie, he called the events of the past nine months in Yemen as a “grand conspiracy,” a “coup” and a power grab. He, however, said he was prepared to fully cooperate with the coalition unity government provided for in the deal, which gives Saleh immunity from prosecution.

Even being burned over much of his body and having shards of wood embedded into his chest by a June 2011 explosion that ripped through his palace mosque as he prayed was not enough to force him out.

Days after the assassination attempt, Saleh flew to neighboring Saudi Arabia — where the leadership had long complained to American diplomats privately that he was “corrupt, unreliable and largely ineffective” and yet indispensable as an ally — underwent medical treatment there for nearly four months while Yemen spiraled further into turmoil, then returned home to resume rule.

In his first major televised speech after returning, delivered wearing medical gloves over his burned hands, he barked that he never wanted power and would “reject it in the coming days” — an odd phrasing that his aides later explained meant he was not stepping down any time soon.

After 33 years in power — which he clung to despite nearly 10 months of mass protests against his rule — Saleh relinquished power in a foreign capital and after months of isolation. Most of his allies had since abandoned him and joined the opposition.

Maneuvering and manipulation had been reliable tactics for Saleh throughout his rule over mountainous, semi-desert Yemen, mired in poverty and divided among powerful tribes and political factions.

He was a leader who could strike deals with Islamic militants and use their fighters to suppress his enemies while raking in millions of dollars from the United States to combat the branch of al-Qaida he let take root in his country. He could let large swaths of his impoverished nation fall out of his control, showing little concern because he had key tribal leaders or local politicians in his pocket. He could even try to take credit when Tawakkul Karman, a female leader of the protest movement demanding his ouster, won the 2011 Nobel Peace Prize: His regime claimed it was the fruit of his promotion of women.

But decades of those tactics left Yemen a fragmented nation.

Islamic militants have taken over several southern cities. Powerful tribes around the nation are embittered by a central government they feel neglected them. Many in the south are determined to secede. Oil resources are running out, as is water, infrastructure in most of the country is neglected, crumbling or nonexistent. In the capital, the pawns he maneuvered in his political games — his son, one of his top generals and top tribal chiefs — could now potentially fall into a fight for power.

Saleh was born into a small tribe allied with the mighty al-Ahmar clan, which heads a tribal confederacy in northern Yemen. The monarchy that ruled North Yemen until a 1962 military coup would often send envoys to the al-Ahmar clan to hammer out policies and get approval for everything from road-building projects to royal decrees.

Saleh apparently took close notice of Yemen’s pecking order and hungered to be part of it. He did not stay long in school, leaving before he was a teenager and enlisting in the armed forces.

His age wasn’t known for sure. His website gives his birth date as March 21, 1946, but many in Yemen say he was born four years earlier. On the other hand, he just happened to be 40 when he took power in 1978 — when the constitution said the president had to be 40. And in the 2006 election, official statements alternated between saying he was 64 or 65.

Whatever his age, Saleh was ambitious and soon caught the eye of North Yemen’s president, Ahmed bin Hussein al-Ghashmi, who appointed him military chief in the city of Taiz, south of Sanaa.

Saleh’s moment came after a bomb in a briefcase killed al-Ghashmi in June 1978. Within a month, Saleh was North Yemen’s president. Saudi Arabia, whose influence pervades Yemen, convinced the reluctant al-Ahmars to back him. Among his first acts was to order the execution of 30 officers — some his former friends — convicted of being conspirators in al-Ghashmi’s assassination.

His reputation cemented as a tough leader, he also knew how to play Cold War politics. Marxist South Yemen was a Soviet client state, so Saleh reached out to Western leaders to leverage aid for North Yemen.

In 1990, with the Soviet Union unraveling, Saleh made his boldest political move: negotiating unity with the south. He had one condition — there would be one president, himself. On May 22, 1990, he raised the flag of the Republic of Yemen at the southern port of Aden. Four years later, he crushed an attempt by the south to break free.

His powerful nexus of the military and tribes made him virtually untouchable. In 1997, parliament rubber-stamped his promotion to field marshal. Less than two years later, he won Yemen’s first direct presidential election with more than 96 percent of the vote.

He also sought to harness a dangerous new force in the country. Arab militants who had fought the Soviets in Afghanistan in the 1980s needed a new home, and the deal apparently offered by Saleh was sanctuary in exchange for respecting his authority.

Jane’s Intelligence Review commented that “harboring terrorists has become something of a cottage industry in Yemen.”

In 2000, that legacy came back to haunt him when the Navy destroyer USS Cole was bombed in Aden harbor, killing 17 American sailors. Washington demanded Saleh to crack down on suspected Islamic militants.

Saleh’s efforts against extremist groups were widely criticized as spotty and ineffective. In 2006, a band of al-Qaida militants made a bold escape from a Sanaa prison that U.S. and Yemeni officials believed had help from regime insiders. The band went on to form al-Qaida in the Arabian Peninsula, the terror network’s Yemen branch. The group was linked to the attempt to bomb a Detroit-bound airliner on Christmas Day 2009 and a shipment of explosive-rigged packages intercepted in Britain and Dubai in 2010.

But the U.S. saw little choice but to partner with him. Washington stepped up counterterror aid to Saleh to fight Al-Qaida in the Arabian Peninsula.

At the same time, Saleh was juggling crises. Shiite rebels in the north rose up, and U.S. officials constantly suspected Saleh was diverting counterterror resources away from al-Qaida to fight them. In the south, the secessionist movement regained strength. In both conflicts, Saleh used jihadi militants — their ideology only a shade away from al-Qaida’s — to help against his enemies.

But Saleh’s tribal and political allies at home were growing impatient, complaining that he was ignoring widespread poverty and that corruption was undermining development.

Most disturbing to them, he was centralizing power in his and his family’s hands. He put his sons and nephews in command of his strongest security units. He appeared to be grooming his son Ahmed, commander of the elite Republic Guard, to succeed him.

Saleh’s room to maneuver steadily narrowed when the Arab Spring revolts swept into Yemen. From late January, hundreds of thousands of Yemeni marched in the streets nearly every day, despite crackdowns. After a particularly bloody shooting of protesters in Sanaa, many ruling party members, lawmakers, Cabinet ministers and, most importantly, powerful military generals and tribal leaders abandoned him, siding with the opposition.

Still, he hung on, depending in part on his son Ahmed’s military forces, which battled his rivals in the streets of the capital, nearly pushing the country into civil war.