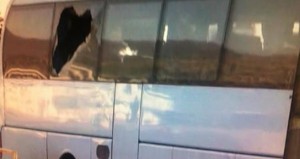 Turkey warned Syria’s president Monday that he cannot continue to oppress his people with tanks and guns forever, even as Syrian soldiers opened fire on at least two buses carrying Turkish citizens, witnesses and officials said.

In separate attacks, Syrian security forces killed at least 13 people during raids in central Syria Sunday, activists said. The British-based Syrian Observatory for Human Rights and the Local Coordination Committees said most of the deaths were in the flashpoint city of Homs, a hotbed of dissent against Syrian President Bashar Assad’s regime.

The attacks on the buses, which wounded two people, appeared to be retaliation for Turkey’s mounting criticism of Assad, whose military crackdown on an 8-month-old uprising against his rule has killed nearly 4,000 people.

“You can only continue with tanks and guns to a certain point, the day will come when you will go,” Turkish Prime Minister Recep Tayyip Erdogan said during a speech at an international religion conference in Istanbul. “Sooner or later, the oppressed will win.”

It was not clear whether Erdogan was aware of Monday’s attacks on the buses when he delivered the speech. The Turkish leader has grown increasingly critical of the Syrian regime, and he said last week that the world must urgently “hear the screams” from Syria and do something to stop the bloodshed.

Turkey has allowed Syrian refugees and military defectors to take refuge on its soil, and Syria’s political opposition has used Turkey as a place to meet and organize.

Assad’s deepening isolation and the growing calls for his ouster are a severe blow to a family dynasty that has ruled Syria for four decades — and any change to the leadership could transform some of the most enduring alliances in the Middle East and beyond.

The attacks on the buses carrying Turkish citizens occurred near the central Syrian city of Homs, where opposition to the regime is high.

One of the bus drivers, Erhan Surmeli, said he was taking 25 butchers back to Turkey from Saudi Arabia following the Muslim festival of Eid Al-Adha, or the feast of sacrifice.

“We had stopped at a checkpoint,” Surmeli told The Associated Press by telephone from a Turkish hospital near the Syrian border. “Syrian soldiers emerged from behind sandbags and cursed Erdogan when we told them we were Turks. Then they suddenly opened fire at the bus.”

The vehicle crossed into Turkey with at least one smashed window, video from the Turkish Dogan news agency showed.

“We came face to face with death,” Ahmet Okkas, a passenger, said by telephone. “They shouted obscenities at us and opened fire.”

Another Turkish citizen, Cemil Karli, was wounded in a separate attack on a second bus, the state-run Anadolu Agency said. That vehicle also crossed into Turkey, and Karli was taken to a local hospital, it said.

“We were traveling in a convoy of eight or nine buses. First we were fired upon from a red car,” the agency quoted Karli as saying. “Then others started firing at us.”

“We were shocked. We piled onto each other in the aisle to save our lives,” he said. “I was hit in the abdomen and in the leg.”

Syria’s uprising has grown increasingly violent in recent months. Army defectors who sided with the revolt have grown bolder in recent weeks, fighting back against regime forces and even attacking military bases — raising fears of a civil war.

On Sunday, the commander of a group of Syrian army defectors retracted earlier claims that his followers launched an unprecedented attack inside the capital, Damascus, in an embarrassing turnaround for the armed movement.

Riad al-Asaad, a Turkey-based air force colonel who heads the Free Syrian Army, said in a video posted on the group’s Facebook page Sunday evening that Assad’s government was trying to tarnish the image of the revolution.

“We did not target the party building in Damascus and we will not target any civilian installation,” said al-Asaad, who was wearing his military uniform.

But al-Asaad did not address why his group had claimed responsibility for the attack hours after Damascus residents reported hearing two loud blasts before dawn Sunday. In a Facebook posting — which had been removed by Monday morning — the FSA had said it fired rocket-propelled grenades at the headquarters of Syria’s ruling Baath party.

There were no apparent damage or injuries.

Syria has banned most foreign journalists from entering Syria and prevented reporters from moving freely in the country, making it nearly impossible to independently confirm events on the ground.

The Free Syrian Army, which claims to have more than 15,000 defectors in its ranks, is controversial among protesters involved in the uprising. Many in the opposition want the protesters to remain peaceful.

But the FSA and others say there are limits to a peaceful uprising, and the time has come to meet the regime’s tanks, bullets and tear gas with force.