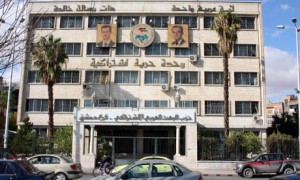 The Local Coordination Committees activist network and witnesses reported numerous explosions in the city center. They said fire trucks headed to the area amid a heavy police presence. But there was no immediate verification of the reports, and other eyewitnesses saw no signs of damage.

The Free Syrian Army, a group of dissident soldiers based in neighboring Turkey, claimed responsibility for the attack. If confirmed, it would be the first significant assault on a government building in the Syrian capital since the anti-government uprising began in March.

Also Sunday, the Arab League rejected a Syrian request to amend a plan that would end the country’s deepening crisis. Under the plan, the Cairo-based organization would send a 500-member monitoring mission to Syria to assess the situation. The Arab League said the amendments were unacceptable because they would alter the plan’s “very essence.”

Reuters news agency quoted Syria’s Foreign Minister Walid al-Moallem as saying “the plan as it stood compromised the country’s sovereignty, but that Damascus had not rejected the mission.”

Meanwhile, in an interview published in Britain’s Sunday Times newspaper, Mr. Assad vowed he will not “bow down” to international pressure to ease his brutal crackdown against “militants” who he says are massacring Syrians on a daily basis.

The embattled president, who took over from his late father, Hafez al-Assad, in 2000, said there would be elections in February or March when Syria would vote for a parliament to create a new constitution. He also repeated earlier warnings that any foreign military intervention in Syria would “shake the entire Middle East.”

Damascus has been facing mounting international pressure to end the unrest. The United Nations says the crackdown has resulted in more than 3,500 deaths.

British Foreign Secretary William Hague said he will meet with Syrian rebel leaders in London Monday. Hague has condemned the violence and called for Mr. Assad to step aside.