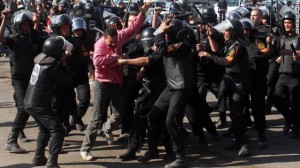 The raging clashes between police and protesters in Cairo’s Tahrir Square on Saturday injured dozens of people and prompted a call from a prominent grass-roots group for citizens to resist the military-led government.

The April 6 Movement, which figured prominently in the toppling of President Hosni Mubarak this year, issued a statement urging its members to descend on Tahrir “immediately because resistance is the only solution.”

“Down with military rule,” the movement said.

The fighting erupted earlier in the day when police worked to clear the area of people who remained in the square after Friday’s massive protests in Tahrir. Tens of thousands of Egyptians turned out on Friday to protest plans for a constitution that would shield the military from public oversight.

As evening came Saturday, police blanketed the square, firing tear gas and warning shots. Protesters threw Molotov cocktails and rocks and torched a police van. Scuffles broke out on side streets. Tires burned amid thousands of protesters at the scene, witnesses said.

At least 168 people were injured, state media said, citing the Health Ministry. The Interior Ministry also said 20 police officers have been injured and eight people have been arrested.

“We sent hundreds of Central Security Police Forces and forced out the remaining several hundred protesters who refused to go home. We arrested four thieves and thugs who acted aggressively and beefed up security in and around square overnight,” Interior spokesman Alaa Mahmoud said earlier Saturday.

The Friday throng, dominated by Islamist parties but including secular protesters as well, turned out ahead of upcoming parliamentary elections set to begin on November 28.

Mahmoud said the “Islamists and revolutionaries had left as they promised not have a sit-in.” But stragglers remained, and he said many of the people who stayed in the square were families of those injured during the upheaval earlier this year that led to Mubarak’s departure

Egypt has since been ruled by the Supreme Council of the Armed Forces. The military said it wants to transfer power to a civilian parliament and president, but many citizens are dissatisfied with the pace of the transition and the resolve of the military rulers.

But protesters on Friday were upset about proposed principles for the constitution, in which the military’s budget would not be scrutinized by civilian powers. They worry that the military would be shaped as a state within a state.

The outpouring reflected the power of Islamist forces in Egypt, particularly the Muslim Brotherhood’s Freedom and Justice Party.

Those demonstrations occurred a day after hundreds of Coptic Christians marching in Cairo were attacked by unknown assailants. At least 32 people, including two police officers, were injured.

They were heading to Cairo’s Tahrir Square to commemorate the deaths of pro-Coptic protesters killed in clashes in the Egyptian capital last month.

Problems between Egypt’s Muslim majority and the Copts have been on the rise in recent months, with a number of violent clashes reported between the two groups.