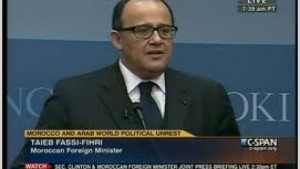 Protesters pelted the Moroccan embassy in Damascus with eggs and stones on Wednesday, Morocco’s ambassador said as his country hosted an Arab League meeting aimed at ending bloody unrest in Syria.

The ambassador, Mohammed Khassasi, told AFP that more than 100 demonstrators had attacked the building and stripped it of its flag.

Khassasi said “between 100 and 150 people protested in front of the embassy and attacked the chancellery with stones and eggs and acted irresponsibly by also attacking the Moroccan flag.”

“I condemn the attacks against the Moroccan embassy in Syria … and what is happening inside and outside the Arab embassies,” Moroccan Foreign Minister Taib Fassi Fihri said in Rabat.

On Monday Syria’s foreign minister, Walid Muallem, apologised for protester attacks on foreign embassies after the Arab League voted to suspend his country from the bloc.

“I, as foreign minister, apologise for this matter,” Muallem told a news conference in the Syrian capital, adding that protecting the embassies was part of Syria’s responsibilities.

On Saturday, hundreds of angry demonstrators attacked the embassies of France, Qatar, Saudi Arabia and Turkey.

France recalled its ambassador to Syria on Wednesday while the US envoy, abruptly withdrawn last month because of security threats, is supposed to return to Syria in “days to weeks,” Washington has said.

“I condemn the violence against the Moroccan embassy in Syria… and what is happening inside and outside the Arab embassies,” he said after reports that Assad supporters had pelted the building with stones and eggs.