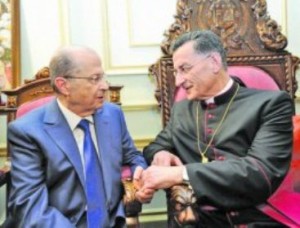 During the meeting he slammed a report published by Ad-Diya newspaper, describing it as a “false” report aimed at misleading the public opinion.

He wondered how a newspaper would “publish such a false report?”

His comments come after Ad-Diya newspaper published on Saturday a report about a French book entitled “The Arabian Tsunami, Le Tsunami Arabe” which stated the reasons behind Rai’s opposition to the Arab spring in general and the Syrian revolution in particular.

The author of the 2 page report Antoine Basbous, who is of Lebanese origin, wrote about the relations that linked the patriarch with the late Syrian Interior Minister General Ghazi Kanaan ( and long-time head of Syria’s security apparatus in Lebanon ) , where Kanaan had reportedly planted espionage devices at the Archbishop of Jbeil.

Rai said that he held only one meeting with Kanaan at the Archbishop of Jbeil, however “I informed Patriarch Nasrallah Boutros Sfeir, the bishops, the President, the PM and Speaker about the nature of his visit.”

Basbous wrote that before the patriarch headed to Paris on an official visit, Syria summoned over a bishop close to the patriarch to Damascus, where the authorities allegedly asked him to warn Rai against any negative statements in Paris.

According to the book, the relations between Rai and Kanaan go back to 1998 at the time when Patriarch Sfeir began his battle against the Syrian domination of Lebanon, where Kanaan tried to break into Bkirki by using three bishops: Emile Saade, Youssef Beshara and Beshara al-Rai.

Rai denied that he had visited Anjar, noting that a “person is accused when he’s innocent. I’m not targeting the media, but the newspaper that published this false report.” Anjar, which is very close to the borders with Syria was the headquarters of the Syrian intelligence in Lebanon

He added: “How can one read a newspaper like this after today.”

In 1982, after the Israeli invasion of Lebanon Kanaan was assigned to head the Syrian intelligence there. He remained the head of Syrian security in the country for 20 years, effectively ruling his Lebanese proxies through a web of agents and loyalist bureaucrats, backed by the Syrian military presence. During this time, he gained a decisive Syrian influence over Lebanese affairs, and gradually subdued the warring Lebanese militias through a combination of diplomacy, bribery and force. After Israel’s withdrawal from its occupation of southern Lebanon in 2000, Kanaan extended Syria’s influence there, and backed the Hezbollah movement’s takeover of the area.

After being an early backer of Syrian president Bashar al-Asad as a successor to his father, Kanaan was in 2002 summoned back to Damascus to become the head of Syria’s political intelligence. He was succeeded in Lebanon by Rustum Ghazali.

Rai came under fire earlier in September from the opposition March 14 parties but won praise from March 8 politicians for his comments during his visit to France . Syrian President Bashar al-Assad is “open-minded” and should be given more chances to implement the reforms he already announced.

He also indirectly defended Hezbollah’s arms by linking the party’s arsenal to the termination of Israeli occupation of Lebanese territory and the return of Palestinian refugees to their homeland . Even MP Walid Jumblatt who defected from March 14 alliance was very critical of Rai’s statements.”

The patriarch claimed after returning to Lebanon that the remarks he made while in Paris “were taken out of context and have nothing to do” with his personal opinion, but reiterated his controversial position on Syria and Hezbollah’s arms during a meeting last October with President Michel Suleiman at the Baabda palace

“I am worried about what is happening in Egypt and about what happened in Iraq and Israel where Christians no longer have presence,” Aoun said