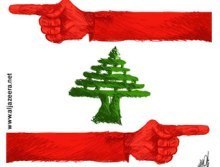 The Lebanese leaders are divided over Lebanon’s vote against the suspension of Syria’s membership in the Arab league.

Lebanon and Yemen were the only countries that voted against the Arab League resolution .

The Arab League voted Saturday to suspend Syria and warned that the country could face sanctions if it did not end its crackdown against anti-government protesters.

The decision was a symbolic blow to a nation that prides itself on being a powerhouse of Arab nationalism.

Violence has continued unabated since Syria agreed on Nov. 2 to an Arab-brokered peace deal that called for the Syria to halt violence against protesters, pull tanks and armored vehicles out of cities, release political prisoners and allow journalists and rights groups into the country.

“Syria is a dear country for all of us and it pains us to make this decision,” the Qatari foreign minister Sheik Hamad bin Jassim al-Thani said. “We hope there will be a brave move from Syria to stop the violence and begin a real dialogue toward real reform.”

The decision comes as November is shaping up to be the bloodiest month yet in Syria’s 8-month-old uprising. More than 250 Syrian civilians have been killed in the past 11 days as the regime besieges the rebellious city of Homs.

Former Lebanese Prime Minister Saad Hariri said on Saturday on his Twitter page that he is , as a Lebanese citizen, “ashamed” of the government’s position saying it does not represent the will of the Lebanese people.

He also slammed the Lebanese delegation’s “shameful” position at the Arab League’s meeting in Cairo and criticized President Michel Suleiman, the parliament and the cabinet ministers for embracing such a “shameful position ” .

On the other hand Prime Minister Najib Mikati who considers himself a centrist tried to defend Lebanon’s vote on Sunday during a visit to Tripoli . He said ” Arab countries “understand” Lebanon’s position at the Arab League meeting on Saturday”, National News Agency reported.

“Lebanon’s position regarding what is happening in Syria was taken in a way that takes into consideration the exceptional historic and geographic ties between Lebanon and Syria and which our brotherly Arabs understand.” He added

Mikati added that Arab countries “are aware that Lebanon will stay in contact with Arabs… We want to shield Lebanon from unpredictable risks and we want we stand for humanitarian causes by our brotherly Syrians who fled to Lebanon [without any political motives].”

President Michel Suleiman who recently defended Syria’s incursions into Lebanon and who denied the abductions of Syrian opposition members in Lebanon stressed on Sunday that Lebanon did not oppose the decisions of the Arab League, saying that it refuses the isolation of any country.

He said: “I call on Syrian President Bashar Assad to implement the Arab League initiative.”

Foreign Affairs Minister Adnan Mansour who is a member of the Amal movement a close ally of the Iranian and Syrian backed Hezbollah militant group said on Saturday during the Arab League foreign ministers’ meeting in Cairo that he objected to the League’s decision to suspend Syria because the “decision has dangerous repercussions for Syria and the region.”

Hezbollah MP Ali Moqdad slammed on Sunday the Arab League for its decision to suspend Syria’s membership in the organization, the National News Agency reported.

Moqdad also said Saturday’s Arab League summit was akin to a “Hebrew meeting that has nothing to do with any Arab citizen.”

“We will always resist and fight despite all the Hebrew summit’s plots against us,” he added.