STL: Debate over trial in absentia for Hariri suspects 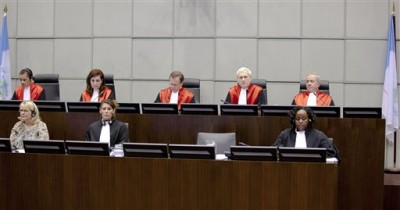 Prosecutors at a U.N.-backed court set up to prosecute the killers of former Lebanese Prime Minister Rafik Hariri told judges Friday it is too early to stage a trial in absentia for four Hezbollah members indicted in the assassination.

The fact that judges at the Special Tribunal for Lebanon (STL) are even considering what would be the first trial in absentia at an international court since the post-World War II trials of Nazis at Nuremberg underscores the difficulty the court faces in having the suspects arrested in a country where the Iranian-backed Shiite militia Hezbollah is the most powerful force.

Hezbollah denies involvement in the Feb. 14, 2005, truck bombing that killed Hariri and 22 others, including the suicide bomber, on a Mediterranean seafront boulevard in Beirut.

Hezbollah’s arsenal far outweighs that of Lebanon’s national army, and the group’s leader has vowed he will never allow a Hezbollah member to arrested for the killings.

Uniquely among international courts, the Lebanon tribunal’s rules allow for the suspects to be tried in their absence if they cannot be arrested. The tribunal has no police force of its own, and must rely on Lebanon or another state to act on the arrest warrants it issued in June.

But prosecution trial lawyer Iain Morley said Beirut should be given more time to track down and arrest the suspects before judges order a trial in absentia.

“A trial in absentia should be a last resort and not a first choice,” Morley told three judges and two alternate judges.

He said Lebanese authorities should explain to the court’s judges “why there are no further reasonable steps which can be taken to locate and effect the arrests.”

The suspects did not have attorneys at the hearing, but lawyers from the tribunal’s defense office did attend. Francois Roux, who heads the office, said the possibility of a trial in absentia could be a delaying tactic for prosecutors to give them time to beef up their case — something Morley denied.

Roux suggested the judges withdraw the arrest warrant for the four suspects, saying that the warrant prevented them taking part in tribunal proceedings as free men — an option he said is available under the tribunal’s rules. Roux said it was possible that the suspects could take part in the case via a videolink from Beirut.

“The issuance of arrest warrants has led to the accused being unable or unwilling to appear freely here,” Roux said, suggesting that removing the threat of arrest could be a way of encouraging the suspects to emerge from hiding and engage with the court.

The defense office is part of the tribunal established to protect the rights of suspects and defense attorneys.

The four suspects include Mustafa Badreddine, a Hezbollah commander who is also the suspected bombmaker for the 1983 bombing of the U.S. Marine barracks in Beirut that killed 241 Americans.

The other suspects are Salim Ayyash, also known as Abu Salim; Assad Sabra and Hassan Oneissi, who changed his name to Hassan Issa.

The suicide truck bomb that killed Hariri was one of the most dramatic political assassinations in the Middle East. A billionaire businessman, Hariri was Lebanon’s most prominent politician after the 15-year civil war ended in 1990.

Even if there is a trial in absentia, if suspects are subsequently arrested they have the right to demand a retrial.

As the hearing adjourned, the judges did not indicate when they would issue a ruling.

Hariri was one of Lebanon’s most powerful Sunni leaders; Hezbollah is a Shiite group.

Prosecutors analyzed a vast network of telephone records to link the “assassination team” to the suicide truck bombing that killed Hariri and 22 others, according to the 47-page indictment.

The indictment says the records showed “a coordinated use of these phones to carry out the assassination.” According to the records, there was a flurry of calls shortly before Hariri’s murder, but they stopped two minutes before the explosion.

The phones were never used again.

Morley said Lebanese authorities have “diligently and dutifully” tried to serve arrest warrants, but he added that was “not the same thing necessarily as locating and arresting” the suspects.

“There is more that can be done,” he said.

Photo: Judges Janet Nosworthy, Micheline Braidi, Robert Roth (presiding), David Re, and Walid Akoum, from left to right in red, are seen during a special session of the UN-backed Special Tribunal for Lebanon, to determine whether to stage a trial in absentia for four Hezbollah members indicted in the political assassination of former Lebanese Prime Minister Rafik Hariri in Leidschendam, near The Hague, Netherlands, Friday Nov. 11, 2011.