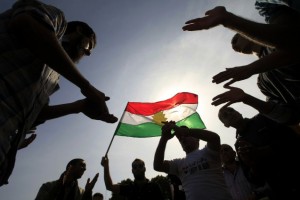 Syrian security forces raided homes and clashes erupted between soldiers and army defectors Thursday, killing at least 21 people across the country, including an 8-year-old girl and six soldiers, activists said.

In some of the attacks, security forces opened fire as they conducted raids in search of dissidents in areas including the suburbs of the capital, Damascus, Deir el-Zour, Hama and Homs, which has emerged as the epicenter of the uprising.

An 8-year-old girl was among the victims in Homs, said Rami Abdul-Rahman, head of the British-based Syrian Observatory for Human Rights.

There also were reports of fighting between army defectors and soldiers near the eastern city of Deir el-Zour and near Maaret al-Numan, a town on the highway linking Damascus and the major city of Aleppo.

The death toll Thursday was reported by the observatory and the Local Coordinating Committees, an activist coalition. The U.N. estimates some 3,500 people have been killed in the Syrian crackdown since the uprising against the authoritarian rule of President Bashar Assad began eight months ago, inspired by the revolutions in Egypt and Tunisia.

On Wednesday, Navi Pillay, the U.N. human rights chief, said an increasing number of Syrian soldiers are defecting, raising the risk of a Libya-style civil war.

“Where basic human rights are trampled and peaceful demands for change met by brutal violence, people are eventually compelled to have recourse to rebellion against tyranny and oppression,” Pillay told the U.N. Security Council.

It is difficult to gauge how many people have defected from the army and what kind of threat they pose to the regime. Although the crackdown has led to broad international isolation fo Assad, he appears to have a firm grip on power, retaining the loyalty of most of the armed forces.

Assad, and his father who ruled Syria before him, stacked key security and military posts with members of their minority Alawite sect over the past 40 years, ensuring loyalty by melding the fate of the army and the regime. As a result, the army leadership will likely protect the regime at all costs, for fear it will be persecuted if the country’s Sunni majority gains the upper hand. Most of the army defectors so far appear to be lower-level Sunni conscripts.

Syria blames the bloodshed on “armed gangs” and extremists acting out a foreign agenda to destabilize the regime.

Syria agreed to a peace plan last week brokered by the Arab League, but the violence has continued unabated. The 22-nation body called an emergency meeting Saturday to discuss Damascus’ failure to abide by its commitments.

It was not clear what action the league would take if the bloodshed continues, although it could isolate Syria by suspending or freezing its membership. That would be a major symbolic blow to a nation that prides itself on being a powerhouse of Arab nationalism.

The government has largely sealed off the country from foreign journalists and prevented independent reporting, making it difficult to confirm events on the ground.

Key sources of information are amateur videos posted online and details gathered by witnesses and activist groups who then contact the media, often at great personal risk.